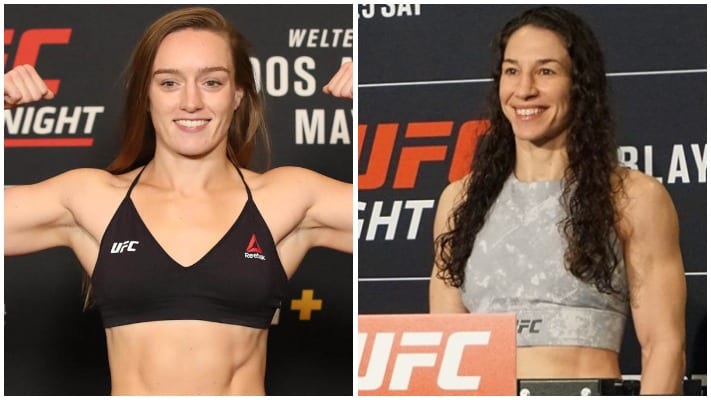 Rising star Aspen Ladd will meet former title challenger Sara McMann in a clash between two of the best at bantamweight on June 27. Ladd took to social media to announce she had accepted a fight but didn’t confirm who she’d be facing or when the bout would be taking place.

Since then MMA Junkie has revealed the details of her upcoming fight in a report that read. “MMA Junkie confirmed Monday that Ladd (9-1 MMA, 4-1 UFC) and McMann (12-5 MMA, 6-5 UFC) have agreed to fight on the card, according to multiple people with knowledge of the situation. The people requested anonymity because the UFC has yet to make an official announcement.”

Ladd was previously scheduled to face Juliana Pena on March 28 at UFC Columbus but that card was scrapped due to the ongoing global pandemic. The plan was to reschedule the bout but Pena is now not ready after suffering an injury.

The 25-year-old is coming off a third-round stoppage win over Yana Kunitskaya at UFC Washington in December 2019. This was Ladd’s first fight back since suffering the first defeat of her career, in controversial circumstances against Germaine de Randamie.

McMann will also be hoping to make it two wins in a row come June. Last time out she got the decision over Lina Lansberg. Prior that she had dropped two consecutive fights by arm-triangle choke against Ketlen Vieira and Marion Reneau.

The June 27 event as of right now has no host state or venue. UFC had intended to hold a show in Austin, Texas, on that date before the coronavirus crisis changed everything. Currently, the UFC is planning to hold upcoming events at its Apex Facility in Las Vegas however they are still waiting for clearance from the Nevada State Athletic Commission.

Who do you think will win when Aspen Ladd fights Sara McMann on June 27?