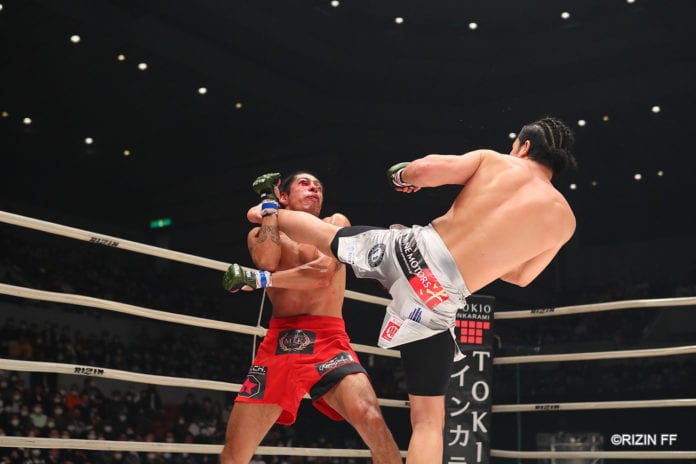 Asakura came into this bout as the heavy favorite and was riding a seven-fight win streak. However, it was Salas who surprised in the opening round. The RIZIN debutant put on an entertaining show for the fans with his aggressive start to the contest. Asakura responded in kind as both men wasted no time in getting down to business.

However, despite his early aggression and confidence, it always felt like Asakura was the one more likely to finish. Salas did not make life easy for the hometown hero, as he dug deep into his grab bag of tricks as he looked to unsettle Asakura. The Mexcian kept himself busy switching stances, attempting to land flying knees and superman punches. But could not land a telling blow.

Asakura’s heavy kicks were causing a problem for Salas, as was the Japanese fighter’s punishing body shots. When the first bell sounded, both men returned to their corners with marks of battle. Salas was bleeding from a cut above his right eye, while under Askura’s right eye, a welt was forming.

After a frantic first-round, the pace settled in the opening stages of the second before Askura landed a solid body-shot and brought his kicking game back into play. Salas had slowed down now, and when a huge high roundhouse kick landed on the Mexican, a stoppage seemed inevitable, and the ref duly obliged.