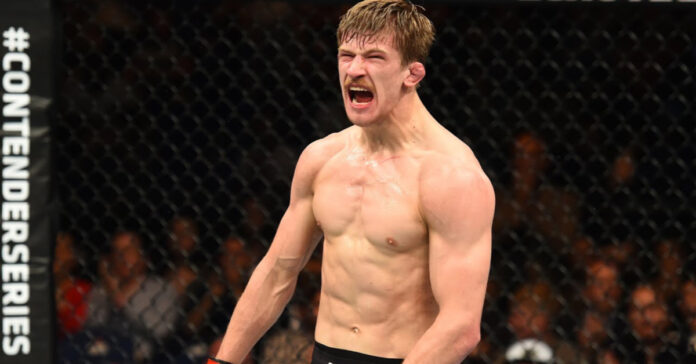 Arnold Allen believes that he has done enough to earn a top contender.

“Anyone in that top five,” Allen said backstage at UFC Fight Night 208 in London this past Saturday. “I’m 9-0 in the UFC. I don’t even know my record total, but it’s pretty good I think. I feel like I deserve or if anyone deserves to fight upwards, it’s probably me. I’m 9-0 in the UFC. I just finished Dan Hooker. Give me somebody in that top five – any of them.” (Transcribed by MMAJunkie)

Allen would like to test himself in a five round fight, so the Brit may be looking to headline a Fight Night in the near future. Allen is one of the best strikers in the division, to go along with fantastic grappling.

“The one thing I really want is to try and get a five-rounder,” Allen said. “My aspirations are title fights, and it would be pretty sh*t to go into a title fight never fighting a five-rounder. But if there’s a three-rounder going and that’s all there is for the end of the year, then that is what it is.”

Allen wants to take the next step and is ready to prove he is an elite level fighter. He had even brought up the possibility of an interim title match, with Alexander Volkanovski possibly being sidelined for an extended period.