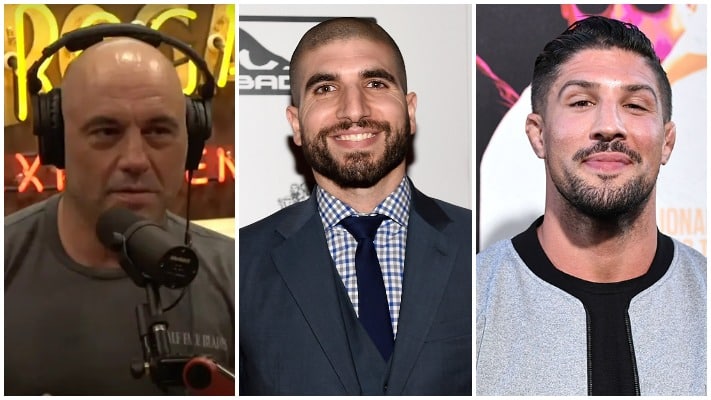 Ariel Helwani has hit back against the “1000% false” remarks made by former UFC fighter turner podcaster Brendan Schaub and his friend, podcasting/stand-up extraordinaire Joe Rogan.

In a segment on his Bellow the Belt podcast, Schaub regurgitated the rumour regarding Helwani’s UFC media ban in 2016, citing his mishandling of top-secret information regarding Brock Lesnar’s return, in the run-up to UFC 200. The information was thought to have been leaked to Helwani confidentially prior to him making the story public.

Speaking to UFC Bantamweight Champion Aljamain Sterling on his The MMA Hour podcast, Helwani fired back at Rogan and Schaub for their continued falsehoods surrounding the incident:

“What Joe Rogan had spewed is 1000% false. What Brendan Schaub has then paraded is 1000% false. Joe Rogan source is Dana White, Brendan sources Joe Rogan. I think you know me long enough… if someone tells me something off the record, and I am sure you have told me things off the record, if I go out and report it, I should be done. There is no way I would practice that kind of journalism and still be here thirteen years later. If you tell me something in confidence and I report it, I should never be talking to you again. I should be outlawed. I should be banned from covering the sport – any promotion.”

What are Brendan Schaub and Joe Rogan’s accusations?

Following Helwani’s ban, Rogan aired much of the whispers regarding the ousting on The Joe Rogan Experience, calling to attention how the UFC had suspected a mole was leaking classified information to Helwani for some time, damaging the promotion in the process.

See the full remarks made by Rogan below:

Moreover, in recent weeks, Schaub would add fuel to the fire of the spat, claiming on The Dan LeBatard Show that he had heard from “a million people” that Helwani is incredibly difficult to work with.

Yet again, Helwani was in no position to roll over when confronted with harmful gossip. While admitting that Schaub had later messaged privately to apologize for the comments, the 39-year-old Helwani again took to The MMA Hour to call for a public apology: