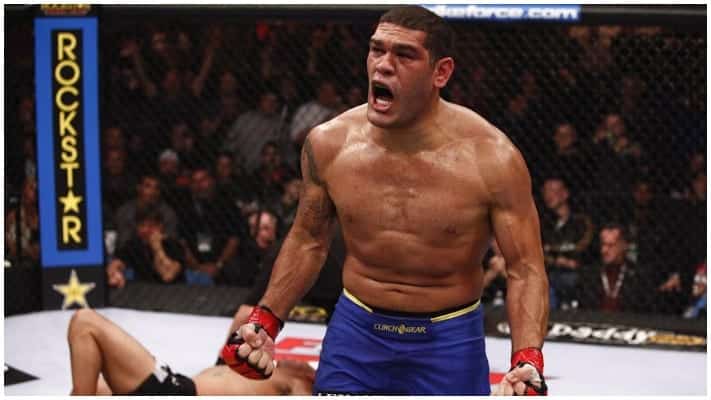 Antonio ‘Big Foot’ Silva is back in the cage but is disputing the TKO stoppage loss in his return fight.

Silva recently returned to MMA under the Megdan Fighting promotion out of Serbia. In the main event of Megdan Fighting 9, Silva faced Quentin Domingos, an up-and-coming fighter from Portugal. The fight was Silva’s first since a defeat at the hands of Vitaly Minakov at Fight Nights Global 68 back in June 2017.

Silva immediately protested and then took to social media to voice his complaints.

“Why the refer to stop the fight? @megdan.fighting … You train for months, give up many things like food, fun and sometimes even family to get 100% in a fight, then a referee comes along and spoils all the hard work you did every day , losing or winning is part of it but unfortunately some people do not know or understand the sport they are part of… They sent me this video to give me an idea that there was no reason for the referee to stop the fight…#megdanfighting”

From the two videos posted to Silva’s Instagram and a fan’s Twitter, Silva attempted to defend and get back up, supporting his claim that the stoppage was premature.

It’s understandable why Silva wants this decision reviewed and hopefully overturned. This decision places him on an eight-fight skid, with eleven losses in his last twelve fights. Silva’s only victory over the previous eight years was a TKO over Soa Palelei at UFC 190 in 2015.

Do you think that the referee stopped Antonio ‘Big Foot’ Silva’s return prematurely?