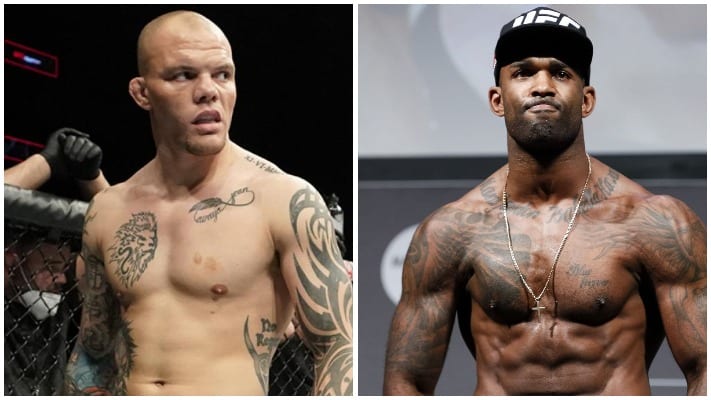 Former light-heavyweight title challenger Anthony Smith has shutdown talks of a potential fight between him and British puncher Jimi Manuwa.

Manuwa ended his MMA career last year on a four-fight losing streak, losing three of the four via TKO or knockout. In his last fight, which took place from Stockholm, Sweden, Manuwa was knocked out by Aleksandar Rakić in just 42 seconds after a hellacious head kick. He hasn’t picked up a victory since knocking out Corey Anderson in their UFC London headliner from March of 2017. As of late the Englishman has been leaning towards making a comeback to the sport.

In the aftermath of UFC Vegas 15, Manuwa took to social media to play down Smith’s win and suggest he’d easily win if they fought, he wrote.

In an interview with James Lynch for Line Movement, Smith addressed the multiple callouts he has received since getting back in the win column, he said.

“What is Jimi Manuwa thinking? Jimmy Crute, crazy respectful kid man. I am a fan of his and I like his style. And the same with Paul Craig, fairly respectful callout the last time after he fought ‘Shogun.’ And even now, gave me props on my submission and then asked if I wanted to go to ‘Fight Island’ or something like that.”

Smith isn’t entertaining disrespectful callouts from Manuwa who he thinks it would be “silly” to fight at this stage in their careers.

“But then Jimi Manuwa, every time he says something about me it just sounds so cringy, like, he’s looked awful in his last four fights and then retired because he wasn’t able to stay conscious the entire time he was fighting,” Smith said. “If he wants to come back, man, that would be silly for me to entertaining at this point.” (Transcribed by MMA Mania)

Do you want to see Anthony Smith vs. Jimi Manuwa?