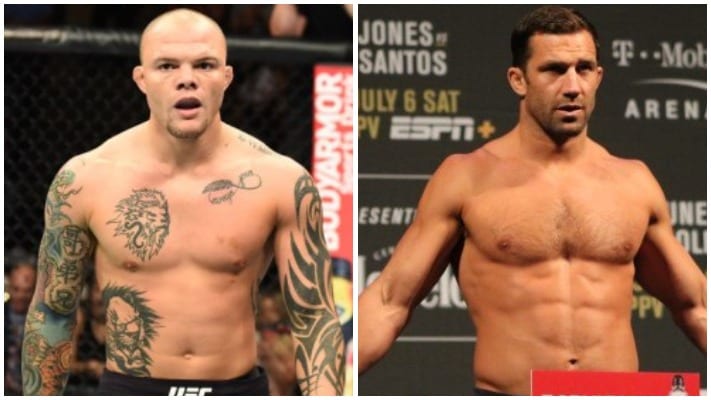 Light-heavyweight contender Anthony Smith remains interested in fighting former middleweight king Luke Rockhold who recently announced he would be returning to the sport after a brief retirement.

Smith has had beef with Rockhold since the California native ripped the UFC for granting ‘Lionheart’ a title shot against Jon ‘Bones’ Jones. Although time has passed Smith still holds a grudge against Rockhold who he says is still a great fighter despite their differences.

“Yeah. As much as I talk badly about Luke Rockhold in the media, to my friends, to almost anyone who will listen, I have never said he is not good at fighting,” Smith said on Sirius XM. “Luke Rockhold is a badass. He is very good, he is a dangerous striker. His top game and jiu-jitsu is legendary, people talk about that s**t in the gym. I have never rolled with him, I know plenty of people who have. Almost all of them say he is a monster on top. I don’t want that to get twisted that because I don’t like him and I talk trash about him, that I don’t think he is good.

While Smith recognizes Rockhold is a talented fighter he questioned his rivals ability to take a shot and expressed his wish to “beat up” someone who he doesn’t particularly like, he said.

“I think if he could – I don’t know how to say this without sounding like an asshole – if he could take a shot and not fall asleep every time, Luke Rockhold is still one of the most dangerous guys in the world. I would love for the opportunity to compete against a former champion against someone that is as good as Luke Rockhold. And, I’d love to beat up someone I don’t like that much. So, I will always jump at an opportunity to fight Luke Rockhold any chance I can get.” (Transcribed by BJPENN.com).

Do you want to see Anthony Smith fight Luke Rockhold?