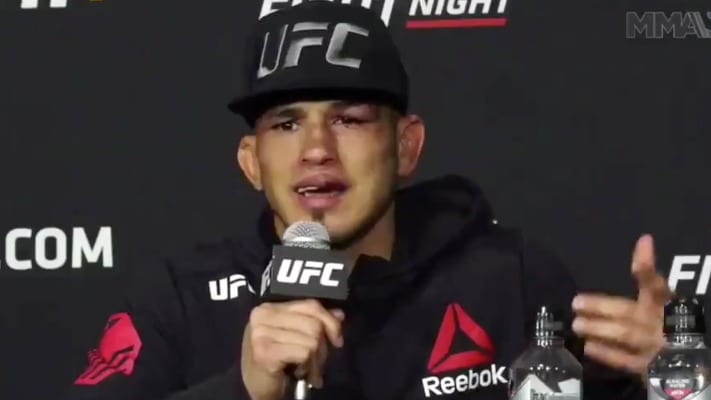 Anthony Pettis wants to run things back with Tony Ferguson.

Pettis made it two wins in a row following an impressive unanimous decision victory over Alex Morono in their welterweight bout at UFC Vegas 17 on Saturday night.

As a result, the former lightweight champion is now on a winning streak for the first time since 2014. However, he stated in his post-fight interview that he plans on going back down to his old division.

As for who he wants? He believes a rematch with “El Cucuy” makes sense.

“I think Tony makes sense, man,” Pettis said at the post-fight press conference. “I think Tony Ferguson coming off his two losses — and he’s fighting tough dudes — that’s what I hate about this sport. Guys are like, ‘oh, Tony’s done.’ Dude, he’s a dangerous dude.

“But I think that would be a good fight for me to jump back in the lightweight mix and he’s still right up there.”

Ferguson, of course, defeated Pettis via second-round TKO when they met in a lightweight contest in the co-main event of UFC 229 back in October 2018.

Following UFC 256 last weekend, however, Ferguson is now on a two-fight losing streak. And Pettis believes with some adjustments in addition to a proper camp, he can come out on top against the former interim champion.

“Man, he got me early with those elbows,” Pettis added. “I think I make some adjustments in there and actually have a full training camp. Not taking anything away from him but I took that fight on short notice, the weight cut was horrible and I just wasn’t mentally there in that process. I was just doing these 155 fights because I kind of had to, not because I want to.

“That’s the difference right now. I’m making the decision outside the Octagon to make these fights go easier.””