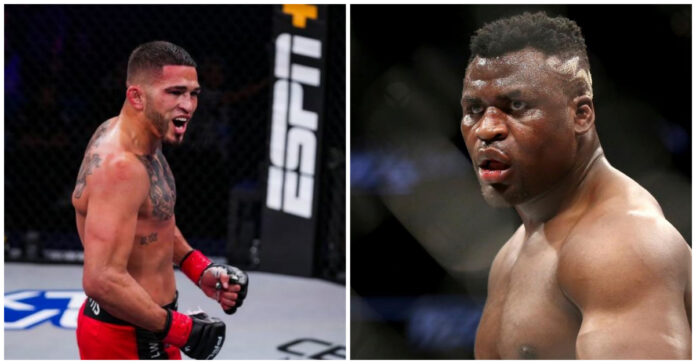 MMA veteran Anthony Pettis earned more money with the PFL than Francis Ngannou did in the UFC.

Former UFC lightweight champion Anthony Pettis enjoyed a near decade-long run in the UFC before making the switch over to the Professional Fighters League. After an unsuccessful debut in the PFL against Clay Collard in April 2021, Pettis would rack up a record of 1-3 in the promotion. His latest outing against Steven Ray resulted in a submission loss last month.

According to The Georgia Athletic & Entertainment Commission, Pettis earned $750,000 just from his last bout, as reported by MMA Fighting.

It’s important to note that Pettis is not the same fighter he used to be. The 35-year-old Wisconsin native was clearly past his prime before making his way into the PFL although he did win his final two bouts in the UFC.

When we compare Pettis’ earnings to the current UFC heavyweight champion Francis Ngannou, it seems all the more shocking considering the economic disparity between the two organizations. “The Predator” has remained on the sidelines in recovery from a knee injury.

In his last competition against Ciryl Gane in January, Ngannou came out on top with a unanimous decision to be crowned the undisputed king of UFC heavyweights.

So, how much did ‘the baddest man on the planet’ earn for his efforts? A mere $600,000, that is despite going into the bout with a knee injury against the advice of doctors.

In all fairness, Ngannou refused to sign a new deal with the UFC that could’ve bagged him millions and has been at odds with them due to contract disputes. The promotion doesn’t want to see their champion leave the sport even if it’s for one fight to go box against Tyson Fury.

Ngannou is adamant about his stance on competing against Fury in a mega-crossover match and seems to be running down his current contract with the UFC which expires at the end of this year.