LowKickMMA.com
Home UFC News Anthony Johnson: I Don’t Care Who I Have To Fight, I’ll Be... 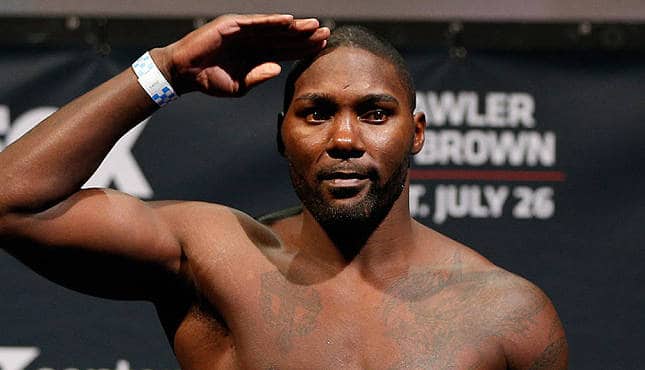 It wasn’t Anthony Johnson’s night at UFC 187 this weekend (Saturday May 23rd, 2015) as he fell short in his attempt at the vacant UFC light-heavyweight title. The Blackzilian knockout artist was able to land some powerful shots early on, even dropping opponent Daniel Cormier with strikes, but ultimately was wrestled thoroughly and submitted in round three.

‘Rumble’ may have had his nine fight win streak snapped, but it appears his spirit is not broken, as he talked candidly during the UFC 187 post fight press conference. The quotes are via MMAJunkie.com:

“A lot of people would have given up if they went through what I went through; I’m just proud of myself for not giving up and trying to be the best person I can be and do the best that I can do and try to be something in life. My goal is still to be champion one day. I was on a nine-fight win-streak and Daniel just defeated me. But I promise I’ll be back. I don’t care who I have to fight, when I have to fight them or where I have to fight them. I will be back and whoever’s there, hey, let’s do it.”

It seems a lifetime ago that a severely shrivelled Johnson attempted to make a UFC career at welterweight. In his defense, ‘Rumble’ scored some savage knockouts at 170 pounds, but he was clearly cutting way too much weight to get there. His path finally led back to the UFC, where he is still a force to be reckoned with at light-heavyweight.

“I can’t lie, he wrestled the hell out of me tonight,” Johnson said. “Daniel did an awesome job. He definitely made me carry his weight and he’s heavy as hell. It wasn’t an adrenaline dump. This motherf-cker is heavy. I’m just glad to be in this moment right now. I can’t take anything away from Daniel. I’m happy for him, I’m proud of him and I wish him nothing but success.”

‘DC’ did what many expected to do, he used his bread and butter game plan and it worked to near perfection. His stocky build coupled with the solid wrestling base is a very tough combination to overcome, and for Johnson it simply proved too much to deal with over the course of the fight.

Clearly Johnson is still growing, and this loss will likely make him come back a lot better, or at least it should. He has a great camp in the Blackzilians, and the chances are he can easily make another title run. There is of course the option to fight at heavyweight for a naturally big guy like ‘AJ’, although his lofty ranking at 205 pounds will likely cancel out that possibility.

We’ll see how ‘Rumble’ bounces back from the biggest fight in his career, and given the shallow nature of the top of the division he may well fight for the title again by 2016.