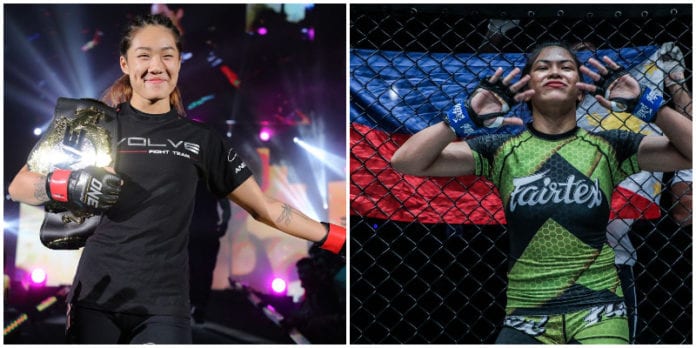 ONE Championship’s Angela Lee appears unfazed about the prospect of defending her atomweight title against the Philippines ‘ Denice Zamboanga.

Zamboanga booked herself a title shot against Lee —who remains undefeated at atomweight—after comprehensively defeating one of the atomweight division’s top fighters in Mei Yamaguchi.

It was a breakout performance from the Filipina, but Lee is still uncertain if the 23-year-old is ready to take the next step.

“I think that fight showed she’s a well-rounded mixed martial artist. She’s up and coming, young and like every atomweight contender out there, she wants the belt. That’s the end goal,” Lee said in an interview with the South China Morning Post.

“We were able to see parts of her game with Mei and the fight before that. I think she’s good everywhere, but I don’t think she has what it takes to take it that next level deep – that’s where I would be testing her. But yeah, I’m excited for it whenever it does happen.”

Lee’s last outing was over six months ago at ONE: Century in Tokyo, Japan, where she successfully defended her atomweight against China’s Xiong Jingnan—who dropped down from strawweight for the fight.

The Hawaiian based fighter is keen to return to action as soon as possible and is keeping active, so she is ready to go as soon as she gets the call from ONE.

“I’ve been staying busy and staying ready so that when the call comes, I’d be ready to take it on short notice, and I think all of us fighters are itching to get back in the cage.”

At the moment, there is no set return date for ONE. However, Singapore — which is where the promotion is based — is due to begin slowly reopening from June 2 with the government laying out a three-phase plan to get the city-state up and running.

How do you see this bout going down?