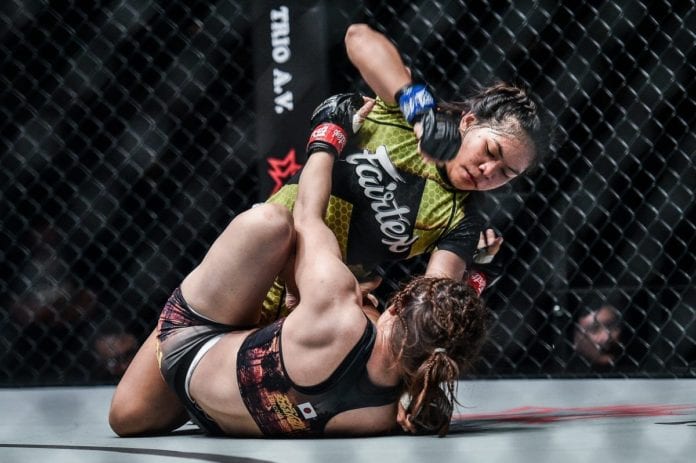 In just two fights, Denice Zamboanga has gone from unknown newbie to ONE atomweight title challenger. The 23-year-old Filipina, who only made her promotional debut in December, has wasted no time in establishing herself as the latest threat to Angela Lee’s title reign.

Zamboanga’s first appearance under the ONE banner saw her take on Mayalsian star Jihin Radzuan on Radzuan’s home soil. In front of a vocal and partisan crowd, the ONE debutante nullified her opponent’s vaunted ground game and walked away with a unanimous decision win.

It was an impressive performance from Zamboanga, and one she backed up two months later in Singapore, where she comprehensively defeated veteran Japanse fighter Mei Yamaguchi.

Yamaguchi came into the fight riding a four-bout winning streak but found herself outgunned by the newest kid in the division. Back-to-back victories over two of the division’s toughest fighters have given Zamboanga momentum as she gears up for her bout with Lee.

“I didn’t expect that in my first bout with ONE Championship, I would be competing with a top contender, and then my second bout was with Mei Yamaguchi. As a newbie with ONE, I was surprised and amazed that I could face the top contenders so soon,” Zamboanga said, speaking through a translator to LowKick MMA.

“After the Yamaguchi bout, I gained a lot of self-esteem and confidence because Yamaguchi had faced [Angela] Lee twice. “

Fighting out of the world-renowned Fairtex Gym in Thailand, Zamboanga is currently unable to fully train due to the ongoing lockdown in the South East Asian nation.

Thankfully, she is still able to get some work in, with the help of her elder brother Drex— who is also one of her trainers.

“Unfortunately, the gyms are closed because of the lockdown, but I am trying to stay active every day. I am with my brother now, and he helps me to keep active. Everyday we train.

“For now, I am focusing on my striking because I cannot use the mats, so we train outside and do pad work.”

Some of the best strikers on the planet sharpen their tools at Fairtex. For Zamboanga, sparring with the likes of ONE Muay Thai Atomweight Champion Stamp Fairtex has played a massive role in her development as a fighter.

“When it comes to everyday training, I really enjoy the training, I have a lot of funny moments, especially with Stamp. We try to make training light by joking with each other, but when it comes to fight camp, everyone is serious and is very focused on training.

At the moment, Zamboanga is unsure when her title bout with Lee will take place, but when they do meet, she promises that Lee will face a different Zamboanga from the one who fought Yamaguchi.

“If you are going to watch all of my fights, I have shown different skills. It will be a different Denice Zumabnaogo that faces Angela Lee.”

Three years ago, Zamboanga turned down an offer from ONE, because she felt she needed time to develop as a fighter.

Now, with a title shot looming on the horizon, no one could deny that she used her time well.