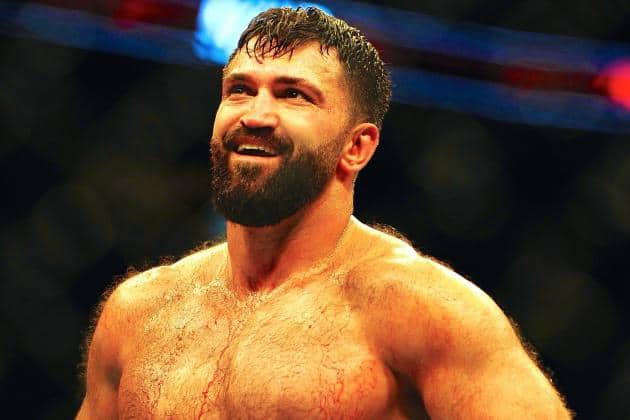 Will Andrei Arlovski overcome the demons of his 2010 loss to Antonio Silva, or is he going to get squashed by “Bigfoot” in Brazil?

Andrei Arlovski will headline this Saturday’s (Sept. 13th, 2014) UFC Fight Night 51 card, as he rematches Brazilian Antonio Silva on hostile territory. “”The Pitbull” faced “Bigfoot” back in 2010 under the Strikeforce banner, losing a unanimous decision in front of the fans in Missouri. Now unbeaten in three, the Belarusian striker will look to leapfrog #4 Silva in the heavyweight rankings.

Arlovski is no stranger to rematches, having fought Tim Sylvia four times in his career, and he feels positive ahead of his rematch with “Pezao” in Brazil. Check out what “The Pitbull” said while talking with MMAJunkie.com:

“I just fought three times with Tim Sylvia (in the UFC), I’m excited about my rematch with ‘Bigfoot.’ “He’s No. 4 right now, so obviously it’s very important. It’s going to be a tough fight for me, but I’m ready. I did my homework. Hopefully it will be a different fight, and I’ll do everything possible to beat him.”

Obviously Arlovski will want to approach the fight with Silva much differently, but the Belarusian says he will also be switching things up physically:

“He was very heavy and very strong, and at the same time, I was smaller,” Arlovski said. “I was around 236 (pounds), so now I’m a bit heavier, and I spent a lot of time with my trainers. Definitely, it’s going to be a different fight right now. Honestly, it was a really hard camp for me, and when I brought this coach from Russia, he made me do a morning workout before my morning workout and made me do sprints and work on heavy bag,” he said. “I’m already tired. I just want to finish my camp and fight already.”

Arlovski’s return to the UFC may have been less than stellar, but his fight on Saturday is still much anticipated. He may find himself in hot water with the promotion if he freezes in Brazil, but he believes there will be some people rooting for him in Brazil:

“Obviously, I would prefer to fight in the United States, but it’s up to the UFC,” he said. “At least six people from Brazil are going to be on my side. I know this for a fact, because when I flew to Brazil for a press conference, I rode with some police officers, so it’s going to be OK.”

It will be a rude awakening for “The Pitbull” in Brazil, as the fans are among the loudest when it comes to UFC events. They will be fully behind their countryman “Bigfoot” Silva, and Arlovski will have to be solid of mind if he wants to get that win. Do you think he has evolved enough to beat Silva in the rematch, or will “Pezao” finish “The Pitbull” this time?