Former UFC Middleweight champ Anderson Silva hasn’t done much trash talking about his upcoming rematch with Chris Weidman, but this isn’t to say that he’s not paying attention to the state of his division.

The p4p great watched as Vitor Belfort stopped Dan Henderson at UFC Fight Night 32; extending his knockout and win streak to three and likely setting himself up for a bout against the winner of Silva vs. Weidman II. Silva was available to talk with sportv globo about ‘The Phenom’ and his hot streak:

“I believe he deserves to fight for the title, even because he has been doing his part (to earn a title shot), just like other fighters like Ronaldo Jacare and Lyoto Machida, who just dropped to 185,”

Silva is spot on about Belfort’s achievements since his last title shot, a spectacular KO loss to ‘The Spider’ at UFC 126, and the chances are pretty high that these two will meet again down the line. Even if Silva loses against Weidman at UFC 168; he will still be valid in the top end of the division.

If Silva wins convincingly, there is no real reason that Belfort shouldn’t be next in line. Reason isn’t always the biggest factor in the deciding of title shots nowadays, but the fight would surely sell a lot of PPVs.

“I saw the fight, he fought really well,” the former champion said. “Vitor has been doing great, showing why he was the UFC champion for a long time. He deserves respect. We’ll just have to wait for the next chapters.”

Dan Henderson was quite like a rabbit in the headlights as Belfort ran him over in dominant fashion; proving that the recent hype around Belfort is anything but that, the guy is a beast.

I would love to  see Belfort get the shot at the MW strap, I’ve always been a fan regardless of the testosterone fuelled rages TRT and steroid related news. The question is: Has Belfort improved enough to win a title, or is he destined to be an (almost) unbeatable gatekeeper? 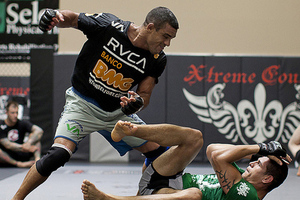