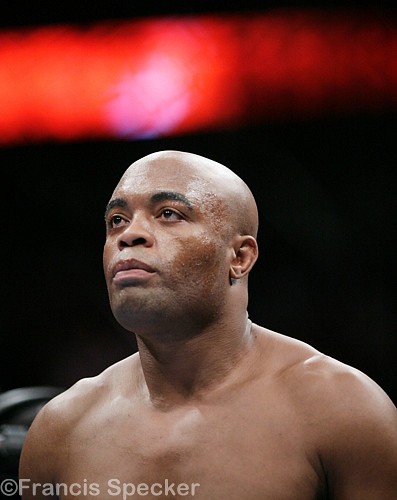 The last time MMA fans saw Anderson Silva inside the Octagon he defeated Yushin Okami by TKO in the second round of UFC 134’s main event. Following that event Silva admitted that he had suffered a shoulder injury while training for that fight.  That injury had kept Silva from training since the conclusion of that fight on August 27, 2011.

Silva recently began training again, but it looks as if he has suffered another injury. According to the UFC Middleweight champion, “I’m not sure when I’ll come back because I’m still with a shoulder injury, another injury arose recently on my lower back, so I’m getting treatment.” – for more see Tatame.com

This news may have an impact on whether or not the winner of the upcoming Chael Sonnen vs. Mark Munoz fight will get the opportunity to fight Silva as had been intimated by UFC President Dana White.

Photo: Anderson Silva before his fight with Forrest Griffin during UFC 101 at the Wachovia Center on August 8, 2009, in Philadelphia, Pennsylvania. Francis Specker