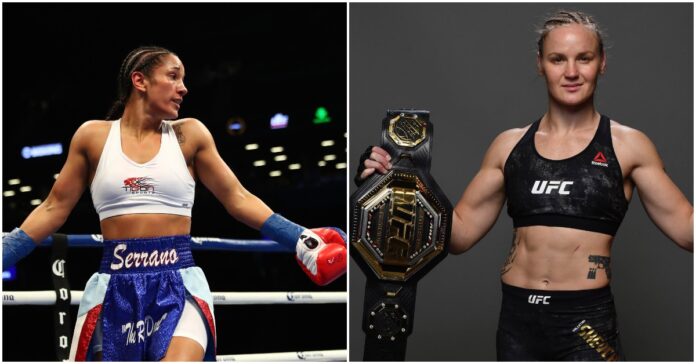 Amanda Serrano has joined Jake Paul in offering to make the move over to the UFC if Dana White can meet his demands.

‘The Problem Child’ and UFC president have been locked in a war of words on social media for quite some time, but this week saw the pair go back and forth over things from fighter pay to Paul fighting in the UFC.

“I will gladly sign a one fight deal with the UFC to challenge Valentina for the Flyweight Championship if UFC agrees to Jake’s offer. Let’s make history.”

As much as she may want the challenge of facing Valentina Shevchenko it’s very unlikely, we will ever actually see Amanda Serrano in the UFC for this to happen, given Dana White’s lack of interest in working with Paul.

Serrano has praised Jake Paul and Most Valuable Promotions stating how much Paul has helped raise her profile in boxing and created more opportunities for her both in and out of boxing as well as having benefitted her in a financial way too.

Serrano was the co-main event on the original card vs Tyron Woodley earlier this year where she beat Yamileth Mecado via decision.

Paul also in his own interaction with Dana White offered a list of things he was aiming for including signing to fight Jorge Masvidal on a one-fight contract and registering with USADA to prove he is not taking any performance-enhancing drugs despite White claiming this about the undefeated boxer.

As much as she may want to realistically White will not be agreeing to the terms set out by Jake Paul, so the likely hood of Amanda Serrano returning to MMA in the UFC is unlikely. Serrano holds a 2-0-1 record whilst competing under the iKon Fighting Federation.

How do you think Amanda Serrano would do in the UFC?