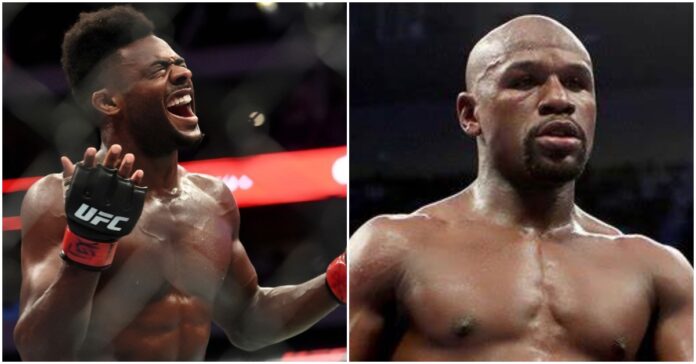 UFC star Aljamain Sterling has revealed Floyd Mayweather tried to ‘steal’ his girlfriend in 2016 when the pair attended the same event.

Aljamain Sterling is fresh from his successful bantamweight title defense at UFC 273 against rival Petr Yan. Now through his biggest challenge as champion, Sterling will be looking ahead to his next opponent with names such as Jose Aldo and TJ Dillashaw being thrown into contention. Floyd Mayweather on the other hand remains retired from boxing, however, he is scheduled to take on Don Moore in an exhibition clash on a helipad in Dubai.

Aljamain Sterling has revealed how he was ready to ‘fight it out’ with Mayweather back in 2016 after the incident occurred at a party the party was attending. Sterling spoke to Spinnin’ Backfist to reveal the story.

“He sent over his minions to try to pick her up, this was back in like 2016 I think. But I was still undefeated at the time. He sent over a guy first who said we can both come down and I was like, ‘Man I’m not stupid’.

“If I come over there you guys are going to try and take her up and try to push me back and then I will face some type of way and I will have to create a scene because you are not going to punk me like that. He left and came back with a girl who said, ‘Yeah you can both come down’. I was like, ‘Listen I know how the scene of this movie goes’.

“You can tell Floyd he is undefeated in boxing and I am undefeated in MMA, if we want to figure out what is the better sport we could fight out today. I don’t think they went and actually told him that, but listen I am a big fan but you aren’t about to have me looking stupid out here.” (Transcribed by Mirror)

How do you think an altercation would have played out between the pair?