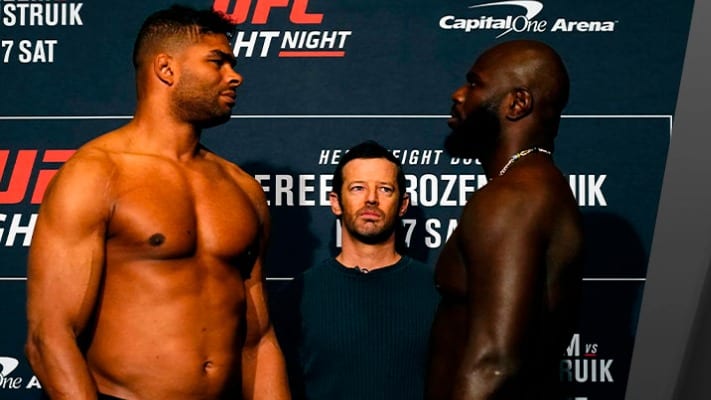 Alistair Overeem is open to the idea of a rematch against Jairzinho Rozenstruik who he believes only beat him due to a poor piece of refereeing.

Overeem stretched his winning run to two last night when he rallied to score a fifth-round stoppage victory in his UFC Vegas 9 main event fight against Augusto Sakai. Prior to that ‘The Demolition Man’ survived an early onslaught from Walt Harris to pick up a TKO win in the second round of their main event fight earlier this year, to make it four wins in his last five fights.

Overeem’s lone loss during that period came at the hands of Rozenstruik. The heavyweight legend dictated the vast majority of their five-round fight and was well on his way to a lopsided points win at UFC Washington. Rozenstruik landed a vicious punch that dropped ‘Reem’ just before the final round ended. The decorated Dutch kickboxer was still conscious but badly hurt. Referee Dan Miragliotta decided to step in and wave off the fight rather than see if Overeem could survive the remaining four seconds.

Speaking to media after his big win at UFC Vegas 9 Overeem expressed his willingness to rematch Rozenstruik but he seemed unenthused by the fight.

“Well Rozenstruik, I destroyed that man. I schooled him,” Overeem said. “In my opinion, it was a very bad decision by the ref waving it off with zero seconds left. I have no problem running that back. In my mind, I already beat him. It’s only on paper that he kind of got it, and he knows it, too. But no problem running it back.” (Transcribed by BJPENN.com)

Rozenstruik has since gone on to suffer a devasting KO loss at the hands of Francis Ngannou at UFC 249. Since then he has bounced back well with a KO of his own against former heavyweight titlist Junior dos Santos.

Do you want to see Alistair Overeem vs. Jairzinho Rozenstruik II?