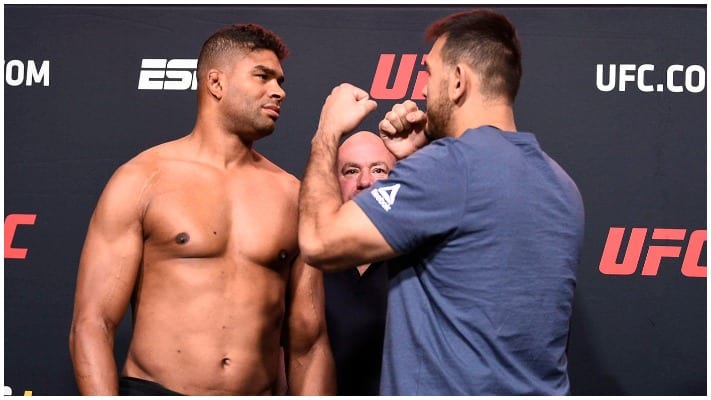 IT’S TIME! The UFC Vegas 9 main event is about to go down. Heavyweight legend Alistair Overeem is hoping to keep his final title charge alive against Augusto Sakai who is currently riding a six-fight winning run. Who’ll emerge victorious? Let’s find out…

Round 1: It’s a tentative start to the fight. Both men are pumping out feints. Alistair Overeem blitzes in but Augusto Sakai slips out of range and lands a nice shot. Sakai lands nice body kick. He senses his opponent is hurt and swarms. The Brazilian lands several shots before Overeem manages to clinch up. Sakai has ‘Reem’ against the fence. The 40-year-old is trying to land knees but nothing comes of the position from either man before they separate. Overeem lands a big shot that appears to wobble Sakai, he pops straight back and smiles at his opponent. Sakai lands a nice uppercut, Overeem takes it well. Sakai swarms forward again with heavy shots, Overeem covers up and avoid taking any significant shots just before the round comes to a close.

Round 2: Another slow start but Sakai eventually lands one to the body and again swarms in with lots of volume. Overeem seems comfortable just covering up, avoiding damage before escaping the position. Overeem lands a knee to the body – it’s cheered by his corner. Overeem misses big and end up with his back against the fence. Sakai is throwing lots of volume. Overeem covers up once again but Sakai rattles some nice body shots off. A clinch battle against the cage ensues. The fighters swap position and short shots as the clock ticks down. The separate with 45 seconds left in round two. Sakai has a cut over his left eye brow. A final blitz from Sakai who accepts the position against the fence – the horn sounds to end round two.

Round 3: Sakai gets to work quickly in round three. He throws with immense volume for a heavyweight. The Brazilian goes to work on Overeem who seems content to just turtle up and avoid damage. Overeem gets distance and lands a nice knee stomp but it’s not enough to keep Sakai off. He comes forward again with lot’s of effective volume which is landing and causing his opponent problems. Sakai lands a nice low kick that takes Overeem’s foot from under him. He pushes the fight against the fence. Overeem lands a trip and secures top position with 90 second left in the round. Sakai pushes him off but doesn’t try to stand up. Overeem gets in the guard and is drops nasty ground and pound. Sakai is busted up right now. The round ends. We’ve got a fight on our hands as we head into the championship rounds.

Round 4: Overeem looks the fresher fighter at the start of round four. Sakai comes forward with a flurry but it looks more labored than in previous rounds. Sakai is really trying to land elbows. He has success! Overeem has a cut on his forehead now. The blood is dripping down onto his face. A low-blow brings a halt to the action. They get back to fighting and another kick seems to stray low from Overeem but Herb Dean waves away the complaints of Sakai. Overeem shoots in for a takedown and gets it. The Brazilian has nothing for him in the grappling. Overeem is landing big ground and pound. Sakai turns his back. This looks like the end. Sakai does well to survive. Overeem lands three successive elbows. The horn sounds to end round four.

Round 5: Overeem wastes no time shooting for the takedown in round five. Sakai offer no defence once again. Overeem postures up and drops nasty ground and pound, Herb Dean steps in to save Sakai from further punishment.