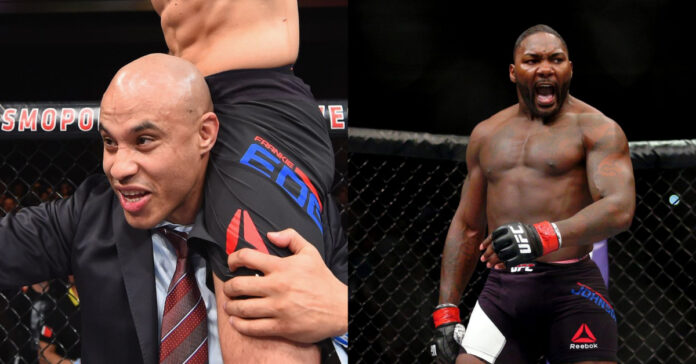 Anthony Johnson’s manager, Ali Abdelaziz, has provided a concerning update for the former UFC star as he continues to battle health complications.

Johnson was originally slated to fight at Bellator 268 in 2021 but was forced to withdraw from his scheduled matchup due to an undisclosed illness. Anthony Johnson’s most recent outing before this cancellation saw him defeat Jose Augusto Azevedo Barros via second-round knockout at Bellator 258.

It has been just over a year since ‘Rumble’ was scheduled to return, and it appears that unfortunately his health complications still have not been resolved. Ali Abdelaziz recently spoke to ESPN’s Brett Okamoto to provide an update on the former UFC title challenger.

“‘Rumble,’ he’s going through some health problems right now. Very sad. I want everybody to pray for him. Pray for Anthony, he’s not doing well. He’s very strong, spiritually, but pray for him,” Abdelaziz said.

Abdelaziz would also go on to show his appreciation for Bellator and Scott Coker for the support they have provided to Johnson throughout his struggle.

“I want to give a shoutout to Bellator, Scott Coker… They’ve been supporting him. You could not imagine how much support they’re giving them.

“Anthony, be strong. A lot of people love you. He’s going to be okay, but he’s not doing well.” (Transcribed by BloodyElbow)

Johnson had a successful time whilst competing in the UFC despite never acquiring a championship belt. The 38-year-old holds victories over UFC veterans such as Alexander Gustafsson and Ryan Bader. The former light-heavyweight contender also secured his final victory in the promotion with a brutal thirteen-second knockout of the former UFC light heavyweight champion, Glover Teixeira.

‘Rumble’ has only been able to make a singular appearance since signing with Bellator and given his age and current health status, there is a possibility that this could have been his final appearance inside of an octagon. Hopefully, we will be able to see Johnson return to competition once his current situation improves.

Should he return, who would you like to see Anthony Johnson match up against next?