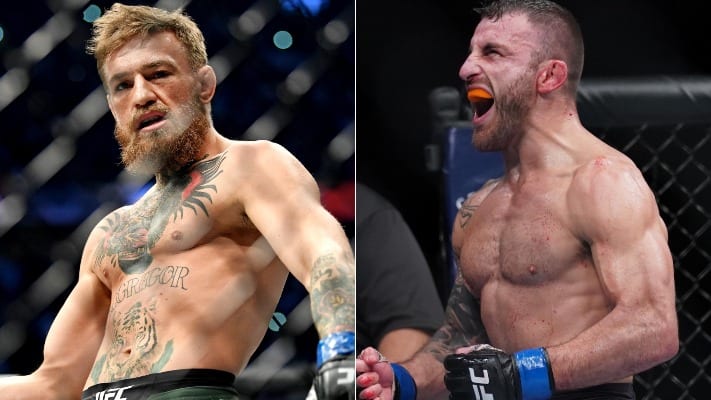 Conor McGregor’s return to the Octagon remains the talk of the town in the mixed martial arts (MMA) community.

“The Notorious” is still gunning for a rematch with UFC lightweight champion Khabib Nurmagomedov. However, he’ll likely have to earn such a rematch given how dominant “The Eagle’s” win over the Irishman was this past October. Khabib will be unifying his lightweight title with interim champ Dustin Poirier in September from Abu Dhabi.

As McGregor seeks his return opponent, featherweight Alexander Volkanovski tells The Body Lock MMA that he’s down to face the former “Champ Champ.” Although McGregor’s days at featherweight are over, Volkanovski believes he presents McGregor with stylistic issues similar to that of Khabib, with a more advanced standup game:

“Oh mate, I would love that,” Volkanovski said. “Again, money, money, money. I know he’s game. I’ll be completely different problems that he’s never dealt with, as well. I’m a pretty bad matchup for him. I’m not the type that is just going to come in and he’ll catch me. I’m going to be a lot harder for him to draw me in like that, and then he’s got my wrestling to worry about.

“Once I get him going and my rhythm, then I’m putting my pressure, then he’s worried about everything. I believe I’m a similar style to Khabib when it comes to the ground and stuff, but I believe I’ve got a whole ‘nother, higher level of striking. But I mean, that’d be some serious money, I’d love that.”

Volkanovski comes off a unanimous decision win over ex-featherweight kingpin Jose Aldo. He was unfortunately passed up for a title opportunity in favor of Frankie Edgar, and was recently battling an infection in a hospital. Now that he’s back to full health, perhaps Volkanovski will be next in line for the winner of Holloway vs. Edgar.