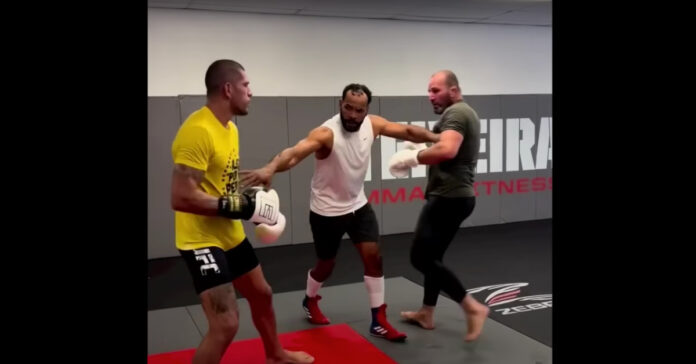 As for Alex Pereira, the Sao Paulo striker is currently scheduled to headline UFC 281 in November at Madison Square Garden, clashing with past kickboxing rival and undisputed middleweight champion, Israel Adesanya in the duo’s third combat sports matchup.

Expected to share the Octagon with the aforenoted, Prochazka again in an immediate title rematch, Teixeira has yet to officially land a date for a title re-run, however, has been linked to both an end-of-year clash at UFC 282, or a Brazil homecoming next January at UFC 283.

Preparing for his premier title showdown under the UFC banner later this year, footage has emerged detailing a rather tense matchup between Pereira, and Teixeira in Connecticut – with the duo trading blow for blow in the pocket on the mats, even landing strikes after the buzzer as a teammate lept between the two.

Featuring on the main card of UFC 276 back in July during International Fight Week, Alex Pereira, a former two-division GLORY Kickboxing champion, landed his third Octagon victory with a staggering first round, knockout win against Sean Strickland, snapping the latter’s seven-fight undefeated run – earning his fight with Adesanya.

The Brazilian holds other UFC wins over compatriot, Bruno Silva, as well as a stunning debut flying knee knockout win over Andreas Michailidis in November of last year, at the same venue of his upcoming title showdown.