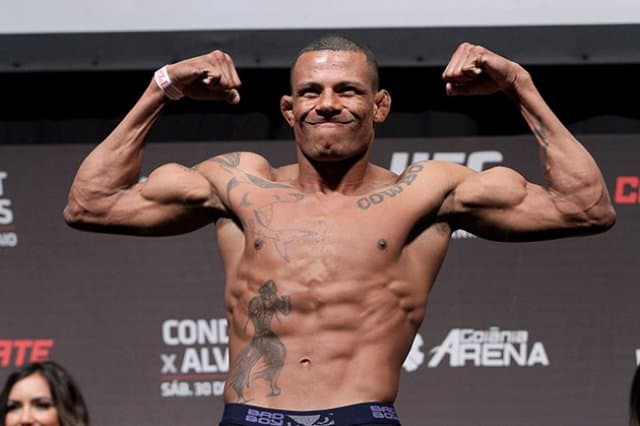 The second lightweight tilt on the UFC Fight Night 77 main card saw Alex Oliveira (13-3-1, 1 NC) taking on Piotr Hallmann (15-5) in Sao Paulo, Brazil. While Oliveira had a chance to push his winning streak to three, Hallmann wanted to avoid his third straight defeat.

Hallmann’s night was ruined by a solid right hand.

Oliveira landed some uppercuts in close. A cut appeared above the left eye of Hallmann. “Cowboy” connected with a knee and pressed “Pletwal” against the fence. From there the action stalled a bit. Oliveira hit Hallmann with a right hand followed by a leg kick and an uppercut. The first round clearly went to “Cowboy.”

Oliveira went for a big leg kick, but Hallmann took his opponent down. Referee Mario Yamasaki stood both fighters back up. “Pletwal” went for a kick, but slipped and Oliveira looked to take control of his back. He went too high, and Hallmann wound up in top control. He maintained the position until the horn sounded.

Less than a minute into the final round, Oliveira starched Hallmann with a huge right hand and the lights were out in Brazil.