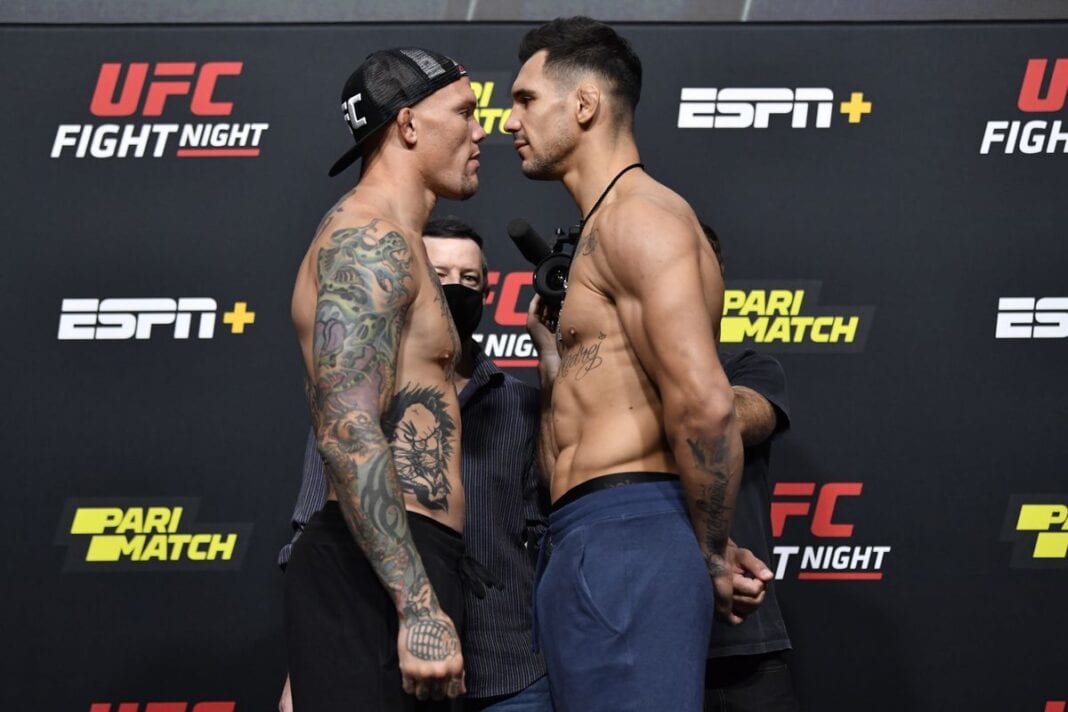 IT’S TIME! The UFC Vegas 8 main event is about to go down. One-time light-heavyweight title challenger Anthony Smith looks to get back in the win column. He faces European standout Aleksandar Rakic. The winner moves back into title contention. The loser has some work to do. Who’ll emerge victorious? Let’s find out…

Round 1: Both men trade leg kicks early. Aleksandar Rakic nails Anthony Smith to the body. They go back to leg kicks. This is some really heavy shots landing right now. Rakic lands another and Smith drops to the floor. His left leg buckled bad. Rakic is on top dropping shots. Smith manages to take advantage of the scramble and take the back of Rakic. He isn’t able to maintain the position and quickly falls off. Rakic is back on top. The Serbian is in the guard – not a lot is happening right now. Smith is using his legs to prevent Rakic from posturing up or advancing position. Smith is backing up to the fence. Rakic stands up and eats a shot from ‘Lionheart’ who remains on the seat of his pants. Rakic engages again on the floor just beforethe horn sounds to end the round.

Round 2: Rakic goes straight back to the leg kicks. Smith is trying to close the distance. He lands a huge right hand. They clinch up and Rakic manages to throw his opponent to the floor and take top position once again. Smith throws up a triangle, but it’s easily shook off. Rakic is content to maintain top position. He’s staying busy with short shotS but not a lot is happening right now. Smith again throws his legs up, this time for an armbar but the submission is once again easily avoided by Rakic. The Serb postures up and lands a few more pop shots at the end of round two.

Round 3: Rakic again opens with the leg kick. He goes high and seems to hurt Smith. Rakic is swarming right now. He gets the fight back to the floor and is back into the top position where he has spent most of this fight. Rakic is content to maintain top position and throw short shots. Smith is slowly trying to climb back to his feet but he’s struggling. Rakic is hammering Smith’s thigh with huge knees. Smith almost gets up again but is pulled back down again with just one-minute left on the clock. Rakic postures up with some ground and pound. Smith finally gets back to his feet with five seconds left. Rakic is already celebrating as the horn sounds to end the round and the fight.