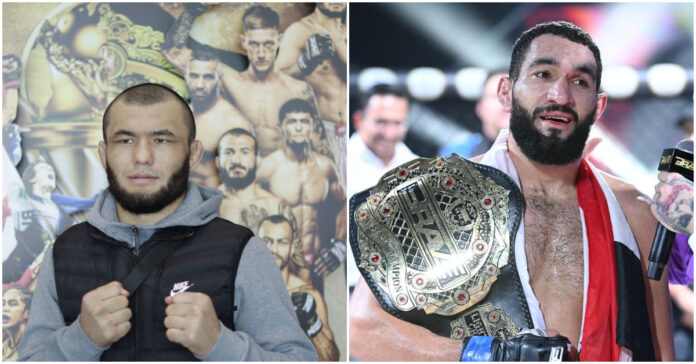 The journey may have been different from what he expected. However, Abdisalam Kubanychbek has still arrived at the destination he was aiming for, a shot at Ahmed Amir’s BRAVE CF lightweight title.

The Kyrgyzstan fighter was in action over the weekend at BRAVE CF 57 when he took on Brazil’s Cleiton Silva for the promotion’s interim lightweight title.

Silva was late notice replacement after Kubanychbek’s original opponent and former lightweight world champion Amin Ayoub withdrew from the interim title fight. Kubanychbek has been on an absolute tear since arriving at BRAVE CF, scoring three straight stoppage victories before his bout against Silva. The 27-year-old started the fight well and was soon dominating the contest before the referee called a halt to the action, saying that Kubanychbek had landed several illegal blows to the back of Silva’s head. However, the Brazilain soon made it clear that he would not continue, and the bout was then declared a no-contest.

Kubanychbek was furious at the result, believing that the blows were legal. BRAVE CF President Mohammed Shahid clearly agreed with Kubanychbek, as he handed the interim title to the fighter as he was leaving the cage.

“Kubanychbek deserves the interim title,” Shahid said in a statement following the event.

“He showed up, he made weight, and those strikes were not illegal. He will get his shot to unify the title with the champion Ahmed Amir next.”

The rivalry between Kubanychbek and Amir is already starting to heat up after the Egyptian confronted Kubanychbek, after Kubanychbek returned to the cage for an interview, holding the interim title. Security defused the situation, but the groundwork has already been laid for what will, without question, be a fiery buildup to the pair’s clash.

At the moment there is date as to when this fight will take place, but hopefully it will not be to far away for the sake of MMA fans.

How excited are you for this fight?