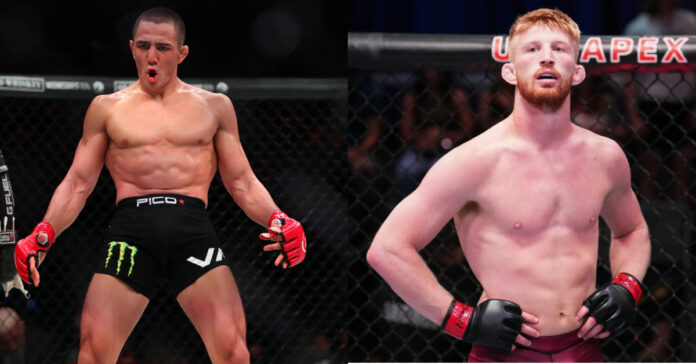 Aaron Pico has shared some words of wisdom for Bo Nickal as he continues his impressive run following his transition to MMA.

Pico will return to the octagon at Bellator 286 as he looks to secure his eleventh win inside the promotion against Canadian fighter, Jeremy Kennedy.

Touted as a prospect himself upon his entry to Bellator, Pico himself is well aware of the added pressure that comes with others having such great expectations of you and therefore had some words of advice for his friend, Nickal.

Speaking to FanSided MMA, Aaron Pico was full of praise for the UFC prospect and reflected on the close relationship they shared throughout his wrestling journey.

“I love Bo Nickal, we were on three world teams together. I know him very well through wrestling. He’s a hard worker and comes from a really good family.”

Aaron Pico has spent his entire professional career competing inside the Bellator cage and therefore has acquired a wealth of experience for someone of 26 years of age. Taking from these experiences Pico encourages Bo Nickal to enjoy the moment but ensure he remains focused on the task at hand.

“Take your time. Enjoy the moment. Enjoy the process,” Pico said. “Just stay focused. I don’t think Nickal is not going to be focused. He has a really good team around him, but more importantly, he has a solid family.”

Having put the MMA world on notice with two extremely impressive performances on Dana White’s Contender Series many people are excited to see just how high the ceiling is for the decorated former wrestler. Nickal was able to dispatch his first opponent in just over one minute following his appearance on DWCS back in August. He would then follow this up in the final week of this season’s contender series by submitting Donovan Beard in under a minute to continue the hype that is surrounding him.

Looking for a quick turnaround Bo Nickal is scheduled to face Jamie Pickett in his promotional debut at UFC 282 in December. Whilst the excitement continues to build ahead of his UFC debut Pico feels the respect Nickal is getting is more than warranted and he himself expects great things out of one of the hottest prospects to enter the UFC.

“I think he’s going to do great things,” Pico said. “I’m rooting for him and I hope he becomes a world champion.” (Transcribed by FanSided MMA)

Nickal will be one of the very few contender series alumni to jump straight onto a pay-per-view card following his performances but given how dominant he was, it should really come as no surprise. Should Nickal be able to defeat Jamie Pickett at UFC 282 just how quickly do you feel he will climb up the middleweight division?

Do you agree with Aaron Pico’s comments on Bo Nickal?