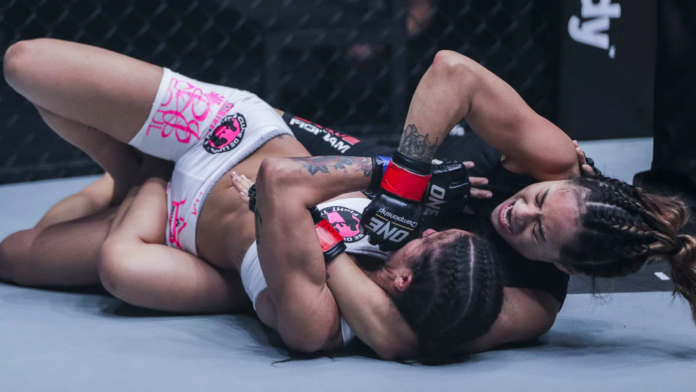 Grappling is a huge part of mixed martial arts. Royce Gracie dominated the early days of professional MMA, using primarily Brazilian Jiu-Jitsu (BJJ) to dominate opponents who were often bigger and stronger. The effectiveness of BJJ forced many to start thinking about combat in different ways. Boxers were no longer seen as the toughest fighters in the world, as MMA proved many of them wouldn’t last a minute with a competent grappler inside the cage.

Nowadays, learning how to grapple is a must for anyone considering a career as a professional MMA fighter. It isn’t just BJJ either. Wrestlers have also enjoyed lots of success inside the cage, and there are many who believe it is the best base to have for professional MMA. That’s because wrestling works well with the way mixed martial arts fights are scored. Top position is perceived as advantageous by judges, so having the ability to control where the fight takes place helps on the scorecards.

The current list of MMA champions makes this clear. Stipe Miocic, Daniel Cormier, Tyron Woodley, and Tony Ferguson all come from wrestling backgrounds. It doesn’t stop there though. Grapplers from many other martial arts have made their marks on MMA as well.

Let’s take a look at some of the different types of grappling found in MMA:

Without a doubt, Brazilian Jiu-Jitsu has been the most effective grappling art in MMA. While it has a lot of similarities with other grappling styles, there is nothing comparable to the finishing ability of BJJ practitioners.

When you’re well versed in BJJ, you’re always in a fight even when you are getting dominated. You only need a single opening to secure a joint lock or choke and force your opponent to submit. There are literally a countless number of submissions, sweeps, and reversals in BJJ.

Something else that separates BJJ practitioners from other grapplers is their ability to finish fights on their backs. The guard is a classic BJJ position that goes against the conventional way people think about fighting. Lay people tend to assume the person on the bottom is losing the fight, but there are actually more submissions and attacks from the bottom position than the top.

The ability to finish from traditionally disadvantageous positions is what makes BJJ king of the grappling arts. There’s also a special kind of confidence that comes with BJJ. Anderson Silva is a prime example of this. When you aren’t worried about being put on your back, other aspects of your martial arts repertoire open up.

As we mentioned earlier, wrestling is one of the best bases for MMA. While it doesn’t have the countless submissions you see in BJJ, it does make up for it with the many pining techniques and holds. While BJJ is about finishing fights, wrestling is about controlling your opponent.

On average, wrestlers are better at taking others down and preventing themselves from being taken down. Once on the mat, wrestlers also do a better job of keeping their opponents pinned on the mat. That skill set works well with MMA. A good wrestler can simply take opponents down and beat them into submission on the ground, or dominate rounds with ground control. Many current and past champions in MMA have wrestling backgrounds.

Wrestling can be so effective in MMA, it allowed Brock Lesnar to secure a UFC title a couple of fights after switching to MMA, dethroning the ageless Randy Couture.

Here’s another grappling art that has been proven to be effective in MMA. It really shouldn’t be that surprising given the fact Jiu-Jitsu is a derivative of Judo. Judo players like Karo Parisyan wowed UFC fans with his spectacular throws during his prime, while Ronda Rousey dominated women’s MMA with her Olympic-caliber Judo.

Like BJJ, Judo also has its share of submissions. For example, the triangle choke is actually a judo choke that was popularized by BJJ players. What separates Judo from other grappling arts is the strong emphasis on throws from all sorts of positions, even seemingly disadvantageous ones like when your opponent has double under hooks secured on you.

A good judo throw stuns your opponent, giving you a chance to finish the person off with a submission or strikes. That’s one of the reasons why Rousey was so dominant during her prime. She often secured submissions right after tossing her opponent to the ground.

Sambo is a grappling style that has been popularized by Russian fighters like Fedor Emelianenko and Khabib Nurmagomedov. It isn’t one of the more popular grappling arts in modern MMA, but it’s one of the most effective.

Sambo practitioners have a diverse range of takedowns in their arsenals, and that variety makes it harder to defend against their takedowns since many of them aren’t often used in other grappling arts. Sambo is also arguably the most complete grappling-based martial art. It incorporates submissions, sweeps, and striking techniques into its curriculum. No other grappling art spends as much time on striking.

That gives Sambo practitioners an edge as they start preparing for all the many different things that can take place during a fight when they start training. It also makes it a very effective grappling art for self-defense.

These are the four grappling arts you will typically see in MMA. While they all have some similarities, it is their unique differences that make them what they are. MMA has evolved a lot since its early days, and you certainly need to be comfortable with grappling exchanges if you plan to have a career as a professional mixed martial arts fighter.

There is no such thing as a superior grappling art. There are many useful things you can learn from each one. When you take a closer look at most past and present MMA champions, you will quickly realize most of them have learned more than one grappling style.

If you plan to compete professionally as a mixed martial artist, train at least two different grappling styles. BJJ is great, but it’s even better when you have some judo or wrestling skills to go with it. The same can be said about any other martial art.