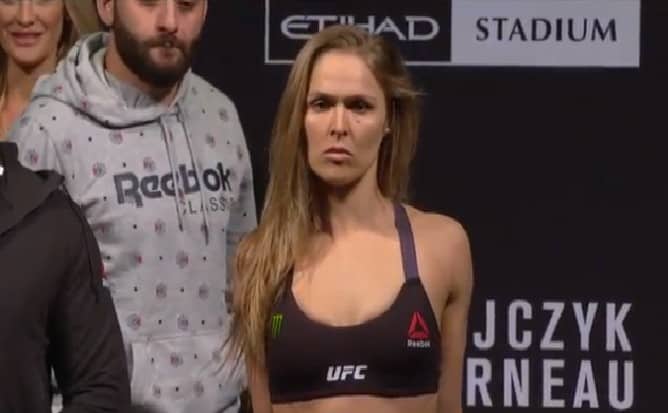 Ronda Rousey is no longer our undisputed, unbeaten 135-pound champion. She was stunningly, and shockingly knocked unconscious by current queen Holly “The Preacher’s Daughter” Holm.

While she has remained quiet within the media, we know that the “Rowdy” one will be taking some time off before gearing up for the immediate rematch which will seemingly go down next summer.

In the wake of her loss, Rousey has received a ton of criticism and hate from fans, but UFC president Dana White actually feels as if her star power is bigger now, something that we may not have even thought to be possibly given how massive she already was.

“It’s crazy because you win and lose in the fight game; it happens. White told MMAJunkie. It’s funny, because we were comparing her to (former boxing champion Mike) Tyson, who had this invincibility. She was a Tyson. And it was never more true than when she lost — because when she lost, everybody was shocked. One hundred million people were talking about it on social media. And I actually think Ronda Rousey is bigger now after the loss than she was before the fight.””

White may have a point here.

While we were aware of Holm’s background and credentials, many just didn’t see here dethroning Rousey, and when she did, the mixed martial arts (MMA) world was thrown into an uproar.

That being said, all eyes will be on Rousey and her eventual return. I’d have to think that the rematch will turn out to be one of the biggest fights in not only promotional history, but possibly sport history given the circumstances.

Will Rousey regain her title, or is Holm simply the best?