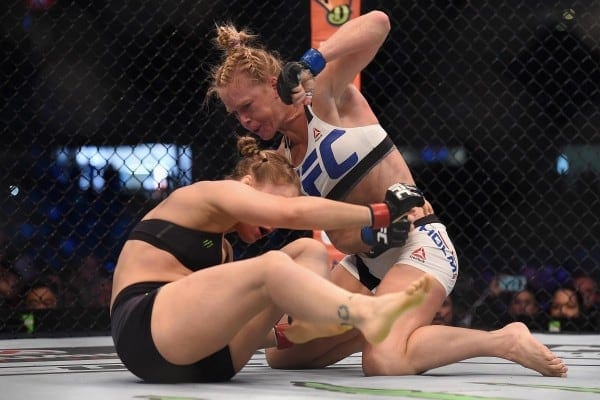 Sonnen was forced to eat his words when Holm shockingly and brilliantly knocked Rousey out cold in the main event of last weekend’s (November 14, 2015) UFC 193 from Australia.

Although he didn’t feel as if Holm was going to win, Sonnen now says that Rousey was a product of hype, hype he himself bought into:

“That division is still so shallow and so new and when the media got behind it, there was so much hype and belief,” Sonnen said on ESPN Radio’s “The Dan Lebatard Show” on Wednesday. “It’s like anything else — and Dan, I’m not above this, either — when you hear something enough times, you start to think that it’s real.”

“Things should become clear — after you see them,” Sonnen said. “I wasn’t good at predicting this one, either. The thing with Ronda is she is created by the media. That was a media sensation. You did have a lot of fighters coming out and saying, ‘I want a Ronda Rousey technique video, because I want to learn those skills.’ She has great skills, but so does everybody else on the roster.””

The “Rowdy” one is undoubtedly a huge star no matter how you look at it, and UFC president Dana White has already said that an immediate rematch makes sense as far as business goes. Rousey has opened up as the early favorite in a potential second go around, but Sonnen doesn’t necessarily agree with that.

Continuing on, “The American Gangster” said that he doesn’t see the outcome of the rematch being any different, also noting that Rousey’s reign may have come to end sooner than many had anticipated:

“When Dana White, our president, sinks his teeth into this and gets ready for a rematch, it’s going to be huge,” Sonnen said. “It just will. I don’t think the reality of the outcome is going to be anything different than it was Saturday. That wasn’t a close match. That wasn’t a competitive match. That was a one-sided beating. But, as for the short term, they will do huge numbers for part two. Long term, every fighter’s career comes to an end. We thought that Ronda’s reign was going to be much longer than this.”

From a business perspective, Sonnen admits that Rousey losing will essentially hurt the promotion, but as one star falls, another may soon rise, although “The American Gangster” doesn’t feel as if it will be Holm:

“I think that when one star goes out, another one is born,” Sonnen said. “”I don’t think that Holly Holm — as great as she is physically — I don’t think she’s going to be able to transcend cultures like Ronda did. Ronda was a very unique personality. She’s very likeable, she’s very marketable. She does and says the right things. Holly is just a really kind and sweet person that’s a really good fighter. I think yeah, you are going to lose a little momentum.”

Do you think Rousey’s reign could fully be over?