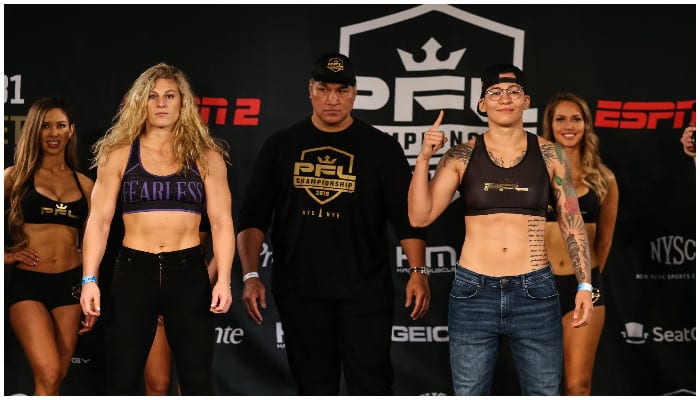 The official weigh-in for the 2019 PFL World Championship went down today, and all 14 fighters successfully made weight. The seven-bout card, screening live on ESPN2 and ESPN Deportes, will start tomorrow at 7:00 pm (ET) inside New York’s iconic Madison Square Garden.

“We started with 68 fighters, and here we are, down to 12 fighters who will each fight for a title and million-dollar prize,” said Ray Sefo, PFL President of Fighter Operations, in a statement to the press.

“Their presence on this stage is a testament to their work ethic, determination, strength and desire to be the best. It will be an explosive and memorable night.”

Tomorrow’s fight will be the second time the pair have faced off against one another. Pacheco took a short-notice fight with Harrison back in May, and despite losing on the judge’s scorecards, remains the only woman to have gone the distance with the American Top Team fighter.

In the co-main event, Ray Cooper III will look to go a step further than he did in 2018 by capturing the PFL Welterweight Championship. Copper made it to the final of last year’s competition before being submitted by Russia’s Magomed Magomedkerimov, in the second round of their million-dollar match-up.

The Hawaiian will take on South Dakota’s David Michaud, who made it through to the final with a majority decision win over Brazil’s Glaico França in their semi-final clash.

Kicking off proceedings will be a non-championship featherweight bout between England’s Brendan Loughnane and David Alex Valente. This will be the second time that Loughnane has stepped inside the PFL cage. He made his successful debut in October, when he defeated Matt Wagy. The 30-year-old Loughnane will also compete in the featherweight division of PFL’s 2020 season.