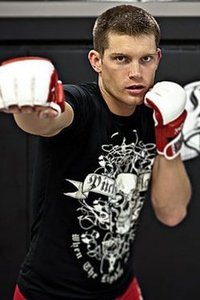 On Saturday, February 4th, undefeated kickboxing phenom Stephen ”Wonderboy” Thompson (5-0 MMA) will be making his UFC debut against Daniel “The Anvil” Stittgen (7-1 MMA) on the preliminary card, which can be viewed on the UFC’s Official Facebook page.

It’s not the first time we get to speak with Stephen Thompson. Only a few months ago, Thompson shared thoughts about his training alongside the likes of Georges St. Pierre at Montreal-based Tristar MMA. “Wonderboy” may be only at the start of his Mixed Martial Arts campaign, but he’s definitely no stranger to punching people in the face. The Young Gun has an impressive kickboxing record, and a unique karate style that could make him one of the biggest stars in the UFC Welterweight division. His journey starts with the fight against Daniel Stittgen.

In his most recent interview with LowKick.com, Thompson spoke about his upcoming fight, his fighting style, as well as the keys to victory and success inside the Octagon this Saturday night.

Can you talk about your training camp coming to this fight, and what are the key elements in your preparation for UFC 143?

Stephen: Well my training camp hasn’t changed much from my last fight because most of them have been ground guys and my opponent for this fight is also a ground guy. The biggest thing I’ve been focusing on is my mental preparation!! The UFC is a MUCH bigger stage than I’m accustomed to.

Stittgen’s original opponent Mike Stumpf suffered an injury during training, which is what gave you this opportunity as his replacement. Given that the fight is approximately two weeks away, do you feel you’ll have a sufficient amount of time to prepare and get in a decent training camp?

Stephen: I’m always training so it makes it pretty easy to get ready for a fight. My training camp has been awesome for this fight!! My team mates from Team Pitch Black here at Upstate Karate have been on me helping me prepare for this fight and they’ve shown me no respect, haha!!!

In light of the fact that this fight will mark your UFC debut, what in your opinion do you have to do in order to get noticed by the casual MMA audience?

Stephen: In my opinion, to get really noticed by the casual mma fan in the upcoming UFC 143 I will have to be exciting with really dynamic and flashy strikes!!

From what I understand you have an incredible Kickboxing record of 57-0 with 40 KO’s, as well as some great fights in the WCL, including a vicious head kick KO of James DeCore. Do you plan on showcasing that same type of striking in your UFC debut? Or are you looking to change up your strategy to better suit the grappling and wrestling involved in MMA?

Stephen: Well, my striking style in kickboxing is slightly different than my striking in MMA. I had to modify it a little for the wrestlers and BJJ fighters but don’t blink, you might miss some flashy kicks!!! Haha.

You’ve been involved in martial arts for almost your entire life. With a black belt in Jiu-Jitsu via Carlos Machado and all the kickboxing experience we mentioned previously, can you explain to us how you came to develop the style you use today?

Stephen: The style of striking I use comes from my Kempo Karate background and yes I have been doing Martial Arts just about all my life. Well since I was 3 years old and I’m 28 now. As for my black belt in Jiu jitsu and I do have a black belt just NOT in RCJ Machado BJJ. Everybody assumes that I have earned my BJJ Black Belt simply because Prof. Carlos Machado is my brother-in-law but he is tough and cuts family NO SLACK so I’m not there YET!!

Some have likened your fighting style to that of Lyoto Machida, what do you think of his Shotokan Karate style and do you see any similarities to your own?

Stephen: Yes, Lyoto Machida and I are both Karate fighters BUT train different Karate styles, His is similar to Shotokan, I think, and mine is a Kempo Karate style which involves long range, short range and ground application. Our style of movement is somewhat similar tho!

What do you feel are your keys to victory against Daniel “The Anvil” Stittgen?

Stephen: My keys to victory in winning this fight with Daniel The Anvil Stittgen will be my wrestling defense and my striking application!

Alright, I’ve gotta ask this because I know someone else will eventually, so I might as well get it out of the way. Tell us how you got the name “Wonderboy”?

Stephen: That’s a good one! How I got the name “Wonderboy” ? WOW, well when I was younger I would dance and sing a lot so my sisters, then, boyfriend would call me Stevie Wonder. Once I started fighting kickboxing at the BOYish age of 15 and was beating grown men the fans would say things like “I Wonder why he got in there with that young boy” hence the name Wonderboy.

Should you win against Daniel Stittgen, are there any other specific opponents you have in mind, that you’ve always wanted to test yourself against or get the opportunity to fight?

Stephen: Well there isn’t really any certain someone I am looking to fight right now. I’m in the sport because I love to fight therefore I would fight anyone that the UFC and Mr. Joe Silva thinks I’m ready for. I’m in the UFC because Mr. Lorenzo Fertita, Mr. Dana White and Mr. Joe Silva was gracious enough to give me a chance. I want to be a UFC Champion and am willing, like I already said, to fight whomever they think I’m ready for.

On behalf of the staff and users @ Lowkick.com we sincerely wish you the very best of luck on February 4th!