I've recently made my dislike of college basketball public.

As a final attempt to figure out what it's all about, I'm going all in with my very own and very first March Madness brackets!

Always seems like the people who do best with this sort of thing are the ones that know least or the ones that set up ridicules guidelines. (Such as going with the cooler mascot or with teams who's nicknames begin with certain letters of the Alphabet). Can't say I know absolutely nothing, as I do understand seeding and know who the big names are. But once I move past those, I have no idea. So to fill up gaps in knowledge and to have some sort of silly guidelines, I give you my rules for picking one school over the other:

1. Schools I know of that are attended or being attended by people I personally know or are current employers or former employers of such people.

3. Schools located in other states I've personally been to (D.C. included)

4. Schools I've heard of in a non basketball context

5. Schools that I've heard of someone famous who went there

So Without further ado, I give you my 2012 NCAA Men's Tournament Bracket! 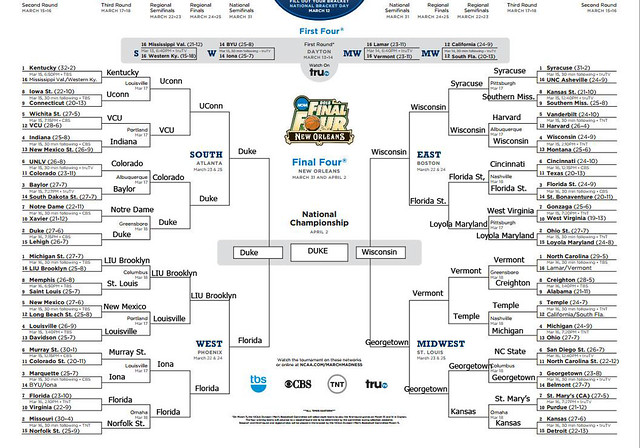 Hmmm… Well, that seems to make as much sense as picking by jersey colors or something of the sort. Apparently, rules 2 and 3 created a heavy east coast bias, which I anticipated, and also made for unbelievable runs for Vermont, who might not even make it to the 64, and 16th seed LIU Brooklyn. Luckily, I have some very smart friends and acquaintances who bailed me out with a not so far fetched Final Four. Amazingly enough, through it all, somehow, I ended up with Duke as the National Champion. That part actually has a chance of being the right call. As for the rest of it, who knows? but at least now I have a good (?) reason to keep up with the scores.