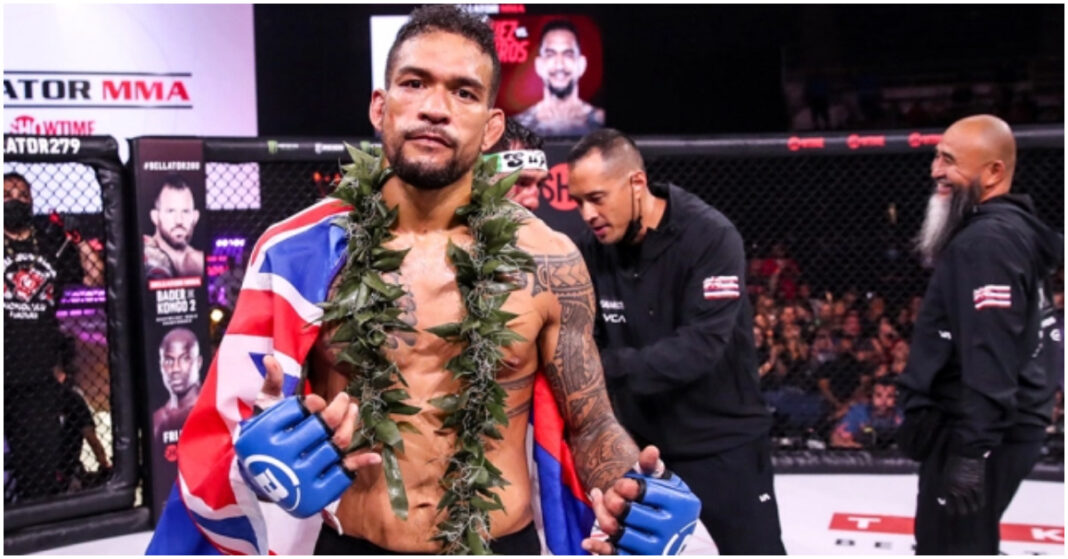 MMA veteran Yancy Medeiros’ return to his homeland of Hawaii with Bellator proved to be a victorious affair.

Yancy Medeiros returned to action as a fan favorite against Emmanuel Sanchez at Bellator 279 in his home state of Hawaii this past Saturday. After being let go by the UFC following four losses in a row, Medeiros won his Bellator debut in impressive fashion against the sixth-ranked contender.

Having won bonuses for Fight of the Night twice and Performance of the Night thrice during his time in the UFC, Medeiros has made a name for himself as one of the most exciting fighters out there. Making his return to fighting in Hawaii after 13 years, Medeiros put on a show for the fans that saw him outscore the former Bellator title challenger Sanchez in a thrilling contest.

In the Bellator 279 post-fight press conference, Yancy Medeiros spoke to MMA Junkie about one of the best wins of his career.

“It’s been five fights since a victory, so it was good to break that losing streak and be at home,” Medeiros said. “Everything happened for a reason last year and Bellator gave me this opportunity to fight in Hawaii.

“Honestly, this was probably one of the worst fight camps with injuries and everything but it was the best fight week for me. Everything was meant to be together. I had injuries, I was sick throughout fight camp, but the aloha and the mana of Hawaii just kept me going. … This week was surreal for me because I got to represent. Thank you, Bellator, for letting me do this for Hawaii. I really appreciate this. .. I hope to give you guys a show again.” (h/t MMA Junkie)

Yancy Medeiros was on a one-fight deal

In an interview with LowKick MMA ahead of Bellator 279, Yancy Medeiros revealed that he had a one-fight deal with Bellator for April 23. As a seasoned pro of the game, Medeiros competed for the UFC for eight years from 2013 to 2021 after starting his career in 2007.

Medeiros was a favorable draw in his former promotion and headlined a show along with the multiple performance bonuses he earned. During his stint in the Las Vegas-based organization, he racked up notable wins against John Makdessi, Erick Silva, and Alex Oliveira.

Given his popularity in the sport, Bellator may be better off getting a new deal signed with ‘The Kid’ that extends his current agreement to a few more fights. He’s expressed his desire to stay and hopes to get a new contract with the company.

“Bellator, I’m here to put on a show everywhere I go, in any venue,” Medeiros said. “I’m always going to promote this love and aloha so come hire this kid.”