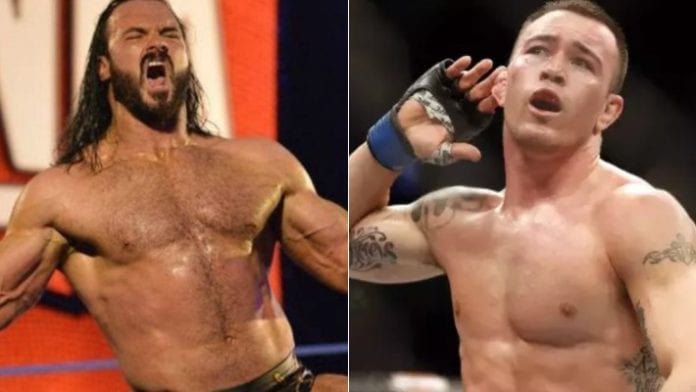 Colby Covington has already kickstarted a feud with a WWE champion — and he hasn’t even joined pro wrestling yet.

Covington recently signaled his intentions of joining the WWE as he planned on becoming a superstar in 2021. He also notably spoke of how current WWE champion Drew McIntyre was a good matchup for him despite the welterweight having a size disadvantage.

And wen McIntyre caught wind of those comments, he decided to mock Covington for his UFC 245 defeat to Kamaru Usman back in December.

McIntyre, of course, is referring to the broken jaw Covington suffered at the hands of Usman en route to a fifth-round TKO defeat.

“Chaos” certainly wasn’t going to let that dig slide as he responded soon after.

“@Dmcintyrewwe I know @fightbobby told me you were a big dumb Scottish Sasquatch, but the only thing broken that night was Marc Goddards morals and judgement. You don’t like my mouth? You can always try to shut it yourself big guy.”

Covington is still under contract with the UFC and doesn’t seem set on leaving the sport until he is able to claim undisputed welterweight gold.

However, the wheels are already in motion for a potential feud with McIntyre whenever he does decide to change career paths.

What do you make of Covington and McIntyre’s interactions?