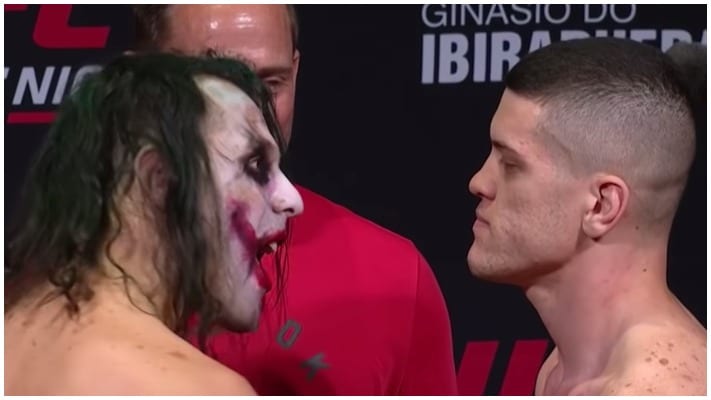 Opening up the UFC Sao Paulo main card is a middleweight bout between Markus Perez and Wellington Turman.

Round 1: Perez starts with a missed body kick. Turman advances forward and they clinch up. Perez defends a takedown attempt and reverses the clinch position with Turman against the fence. He lands an elbow but Turman takes him down. Perez gets up but Turman still has his back. Perez eventually escapes by landing a spinning backfist. Perez is much more active now. Both fighters attempt a number of kicks but none land. Perez taunts Turman after a flying knee attempt from the latter. Turman lands a left. First round ends with them striking at each other.

Round 2: Perez attempts a spinning wheel kick but it’s partially blocked by Turman. Both fighters are aggressive in their striking but it’s Turman who is advancing more. Turman initiates the clinch and takes Perez down. Perez gets up but once again, Turman has his back. Perez escapes and they strike again. They clinch with Turman against the fence. They separate and Perez is the aggressor. Perez is bloodied up from a cut seemingly near his right eye. They clinch again but separate. The round ends with Turman attempting a standing guillotine before an attempted knee on Perez’s head.

Round 3: We return to a striking battle. Perez lands a number of body kicks but Turman responds with one of his own. They clinch again and Turman lands a knee on Perez’s head. Perez reverses the position before he’s put against the fence. Turman has Perez’s back again. Turman takes Perez down again and looks like he’ll keep him there this time. He transitions to full mount but Perez escapes with an attempted leg lock. Turman is now in Perez’s guard before moving to side control and lands an elbow. Lots of pressure from Turman who attempts to ground and pound him. Perez eventually gets up, though. Perez is landing more and is swinging for his life as the fight ends.