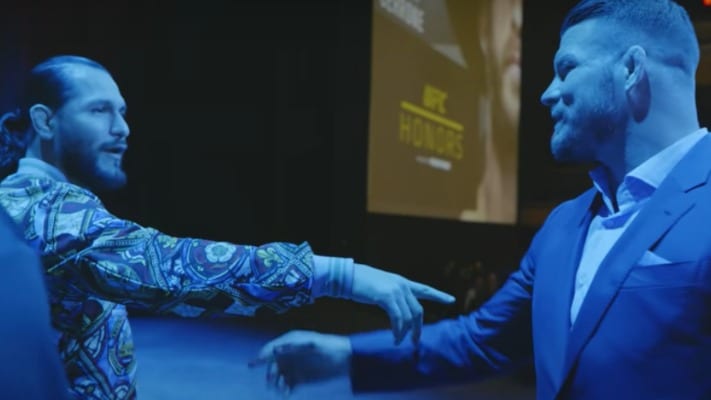 In case you thought there was still beef between Jorge Masvidal and Michael Bisping, think again.

Masvidal crossed paths with Bisping earlier this year in the buildup to UFC 246 in January and things were extremely cordial between the pair as they embraced each other.

Masvidal even promised to send Bisping a case of his El Recuerdo mezcal.

The interaction was posted in a recent video from Masvidal’s YouTube channel which you can watch below:

In case you are wondering why this is so significant, it’s because of the beef the pair had back in 2017.

It all stemmed from Bisping’s rivalry with Yoel Romero as the Briton — who was middleweight champion at the time — notably tore a small flag of Cuba during Romero’s fight with Robert Whittaker.

With his family hailing from Cuba, Masvidal took offense to that among other things as he would have heated confrontations with Bisping whenever they met since. Those interactions can also be seen in the video.

However, things finally cooled down following UFC London last year. And going by this latest interaction, the pair might even be good friends now.

What did you make of their interaction?