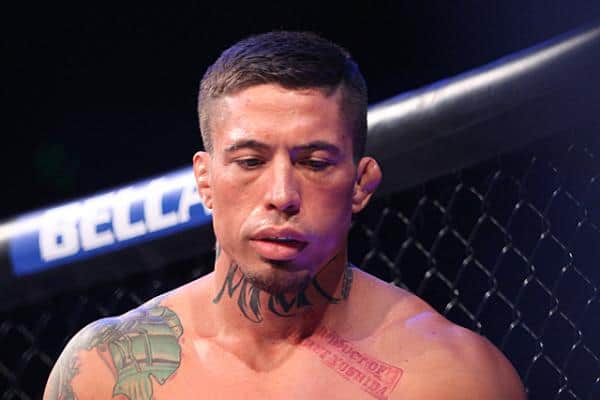 Former UFC and Bellator fighter Jon Koppenhaver, better known as War Machine, has been sentenced to 36 years to life in prison with the possibility of parole after 36 years for the vicious assault of his ex-girlfriend Christy Mack and her boyfriend Corey Thomas, per a report from MMAJunkie.com.

Earlier this year, Machine was found guilty on 29 of 34 charges, which included sexual assault, kidnapping and coercion.

During the sentencing hearing, Machine and his legal team described a difficult upbringing for Machine, but Clark County District Judge Elissa Cadish said that there must be ‘consequences’:

“I don’t think you’re a monster – I think you’re a human being,” she said. “I don’t discount those, but there also have to be consequences for what happened, and I have to look out for the well being of the community as I consider the appropriate sentence. I do think a substantial amount of time is warranted, not only for punishment’s sake, but avoiding danger to the community.”

Mack also appeared at this hearing, describing the brutal circumstances that she has gone through, while voicing her concerns in regards to Machine eventually being released from prison:

“I’ve been punched and kicked, smothered and bitten, raped and tortured,” Mack said. “I was met with this more times than I can count, and I still cry every time I think about how it feels.”

“I wanted to look you in the eye and let you know there are victims in this crime,” Thomas told the judge. “I’m not asking you to do anything that you don’t already know what to do. What I am concerned with how much time the defendant has wasted getting to this point and still to point to how it’s everyone else’s fault. It isn’t. He tried to kill me. Let’s get realistic. He has the background, and he’s done it before. He’s wasted everyone’s time, and I don’t think the minimums should apply.”

Finally, Machine spoke on the situation, admitting that he has many regrets, while also detailing his newly found relationship with God:

“Not a day goes by that I don’t seriously regret some of the things I did,” Machine said. “I was a lost and empty person. I hated the way that I think. I hated my impulses. It caused me to hate myself. I hate myself way more than any of these people do. I would look at myself in the mirror and smash my face. That’s how much I hated myself. It was the only thing I could do to prevent myself from killing myself.

“I gave my life to God. For the first time in my entire life, it’s brought me peace inside. It’s helped me to remove my self hate. It’s given me the ability to manage my depression and anxiety.

“I hated that this happened. I hate that I had to hurt the woman I loved. I hate that I had to ruin my career. But it’s been a blessing in my life. It’s made me grow into a real man. No matter what happens in this case or the future, I’m just glad that I finally have woken up and seen the truth. And I really believe I’m going to be able to be a good role model for the rest of my life.”

What do you make of this harrowing situation?