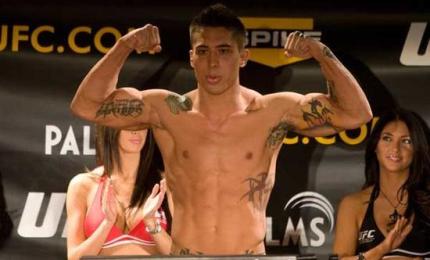 Apparently a corrections officer found War Machine on the floor of his cell with his feet on the bed. A piece of torn sheet linen was wrapped around the leg of the bed on one end and Koppenhaver’s neck on the other.

His lawyer Brandon Sua said that Koppenhaver’s vital signs had “completely stopped” and that he was “pretty much dead” when the officer found him. Sua said he had not spoken with War Machine in several days.

Several suicide notes were supposedly found in his cell.

After the incident, Koppenhaver was cleared by the jail’s medical staff and was then moved to an isolation cell for suicide watch.

Koppenhaver is currently awaiting trial on several charges that include attempted murder stemming from an August incident where he allegedly beat ex-girlfriend Christy Mack within inches of her life, inciting a manhunt.

Koppenhaver did not appear in court on Wednesday, but his legal team did in order to negotiate a plea bargain. Sua said that War Machine does not believe that he would get a fair trial if he let it get that far:

“He feels like the chips are stacked against him. He doesn’t believe he will get a fair trial.”

Koppenhaver is to stand trial in America, where everyone is innocent until proven guilty; that much is true. However, when you’re an admittedly unstable trained fighter  with a long history of violent arrests who has made light of raping women on Twitter, then yes, the chips might be stacked against you when your name comes up for a domestic violence trial.

Mack has reportedly undergone multiple surgeries to repair the damage that War Machine allegedly did to her face back in August. Does Koppenhaver deserve his day in court, or does his attempt to plea bargain signify an admittance of guilt?