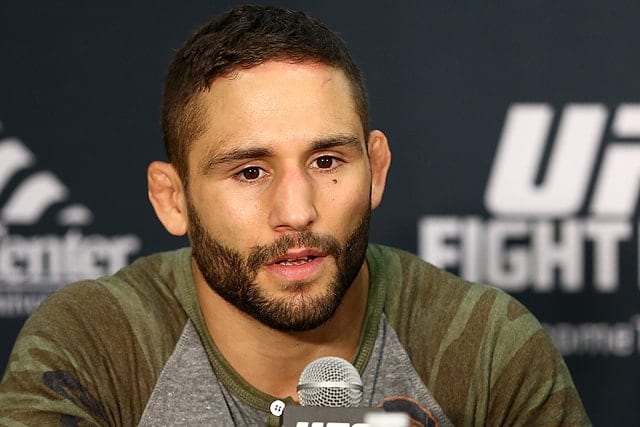 It was a crazy day of big news and announcement’s on Friday September 4, as the UFC got hijacked by Conor McGregor at the ‘Go Big’ media launch. The Irish featherweight wasn’t the only one in good form though, as Rafael dos Anjos and Donald Cerrone attempted to give as good as they got. To be honest, ‘Cowboy’ came up with a couple of golden taunts, claiming he would beat the lucky charms out of Conor McGregor, but his biggest burn came when he mentioned who ‘The Notorious’ had beat.

With two of McGregor’s former unsuccessful opponents sitting in the same presser, Cerrone proclaimed that the SBG member ‘has beat no-one”. Perhaps he’d forgot that the last opponent of the Irish star, Chad Mendes, was sat right next to him.

Oh man, that was painful to watch.

‘Money’ also doled out his fair share of jives towards his old foe, but there’s no doubt that, with McGregor’s abuse and Cerrone’s foot-in-mouth moment, Mendes certainly came out on the wrong end in the war of words.

With Cerrone and ‘RDA’ set for their lightweight title clash, and ‘The Notorious’ lined up for the UFC 194 unification bout with Jose Aldo, there’s the distinct possibility that a superfight between McGregor and ‘Cowboy’ could go down in 2016. It’s common knowledge that the cut to featherweight is not a long term deal for McGregor, and the two popular stars seem to be laying the framework for what would undoubtedly be a huge fight, titles or not.