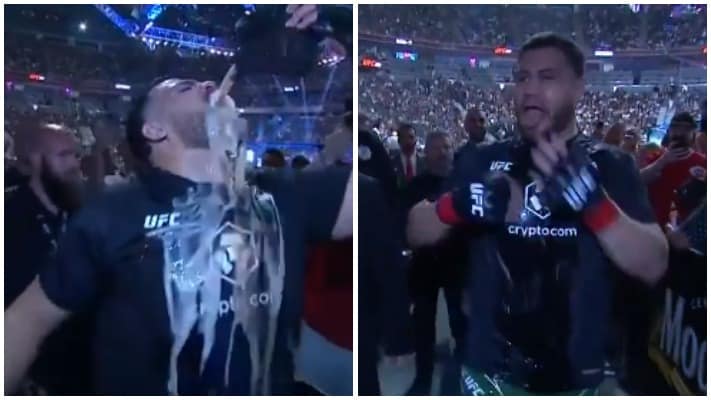 The Australian heavyweight danced to the Octagon singing along to the Spice Girls.

He then went on to knock out one of the most unpopular fighters on the roster, Greg Hardy, in a wild one-round shoot-out.

As soon as the fight finished Tuivasa jumped onto the fence and nailed a beer out of someone’s shoe as he always does.

The fun didn’t stop there though. As Tuivasa exited the arena he did shoey’s with several of the people in attendance.

However, the fun-loving knockout artist got more than he bargained for when one fan slipped some of Dustin Poirier’s hot sauce into his shoe beer.

Tuivasa clearly wasn’t a fan of the new twist to an old classic.

The 28-year-old didn’t let that stop him though and continued to interact with the fans as he left the building.

Tuivasa’s night got even better after the UFC 264 main event came to its dramatic conclusion. Dana White revealed he was one of four fighters who will be heading home with a bumper bonus cheque worth ,000.

Tuivasa now has three consecutive wins inside the Octagon. The always entertaining fighter picked up big KO victories against Stefan Struve and Harry Hunsucker before taking out Hardy at UFC 264.

What did you make of Tai Tuivasa vs. Greg Hardy?