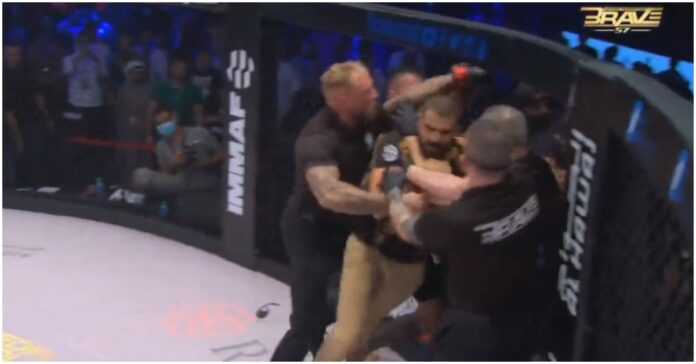 There was a lot of bad blood between Mohammad Fakhreddine and Mohamed Said Maalem ahead of their rematch that took place at Brave CF 57 in Bahrain on Friday evening.

Fakhreddine improved his record to 15-4 when he picked up a knockout win over Maalem who drops to 11-4.

Despite the definitive ending to the bout, the animosity between both men and their teams continued post-fight.

After the bout concluded Fakhreddine went over to his opponents’ corner and rather than give respect, he flipped the middle finger at them while celebrating his win. That prompted one of Maalem’s cornermen to jump over the cage to start an all-out brawl.

Referee Aaron Wallace, to his credit, stepped in and prevented the situation from getting too out of hand. Despite doing his best to restrain Fakhreddine, Wallace was not able to stop the Lebanese fighter from breaking free and throwing a punch at his opponents’ cornerman.

Fakhreddine and Maalem first faced off at Brave CF 52 in August.

On that occasion, Maalem scored a first-round TKO victory but the result was called into question as during the finishing sequence he hit Fakhreddine in the back of the head.

An appeal was filed by Fakhreddine who managed to convince the Italian Federation of Grappling and Mixed Martial Arts to overturn the result to a no-contest.

What do you make of these scenes from Brave CF 57? Do you think we’ll see Mohammad Fakhreddine and Mohamed Said Maalem fight for a third time?