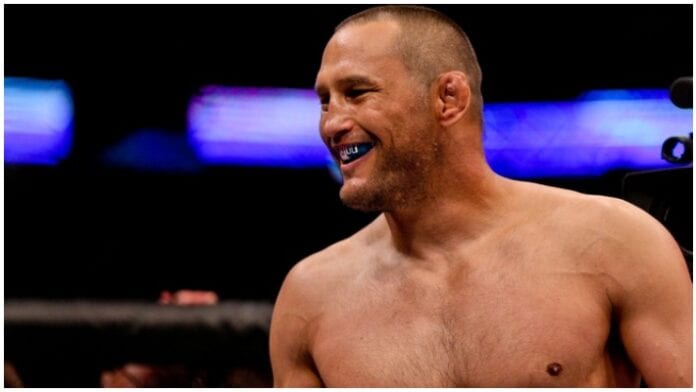 Dan Henderson ended his 2020 by dishing out a nasty leg kick to his daughter’s boyfriend and it was all caught on camera.

The 50-year-old knockout artist hasn’t competed in more than four years but still looked in shape as he brought in the new year with his family. Henderson is surrounded by a small crowd as he begins to line up the kick. His daughter’s brainless boyfriend seems willing to take the kick but notes “this is going to f*cking suck” before Henderson rattles in a shot that buckles him – check out the full video below.

During his Hall of Fame career Henderson captured titles in Pride FC and Strikeforce while also challenging for UFC gold on several occasions. He holds a bunch of high profile wins over the likes of Fedor Emelianenko, Mauricio “Shogun” Rua, Vitor Belfort, Wanderlei Silva, Rich Franklin, and Michael Bisping.

Henderson retired from the sport in October 2016 after falling short against the then middleweight champion Bisping in their long-awaited and eagerly anticipated rematch at UFC 204. After hurting the Englishman twice in the first two rounds Henderson was picked apart for much of the fight and ultimately dropped to a unanimous decision defeat.

Would you take a leg kick from Dan Henderson?