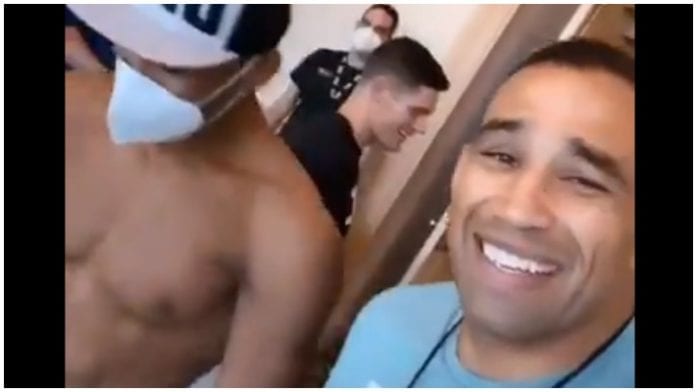 New video footage has emerged showing Ronaldo ‘Jacare’ Souza interacting with other fighters before he tested positive for COVID-19.

According to reports, the card will still go ahead in Jacksonville, Florida later this evening. The states commission is satisfied all has been done to isolate Souza and no further cases will be reported.

The UFC said in a statement that ‘Jacare’ and his team have been in isolation since arriving at the fighters hotel earlier this week, it read. “From their arrival earlier in the week until their departure today, Souza and his cornermen followed UFC health and safety protocols, including practicing social distancing, wearing personnel protective equipment, and self-isolating whenever possible.”

A video clip posted to the social media of UFC heavyweight Fabricio Werdum seems to contradict what the UFC statement claims. ‘Jacare’ is seen interacting with his compatriot and in close quarters with a bunch of other people – check it out below.

Do you think UFC 249 should still go ahead after ‘Jacare’ Souza’s positive coronavirus test?