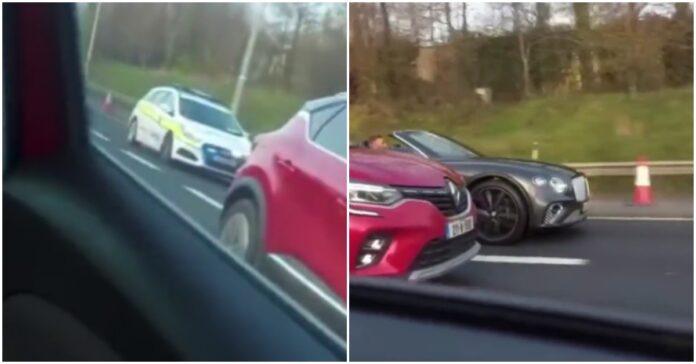 A video has surfaced showing UFC superstar Conor McGregor being pulled over by police in Dublin ahead of his arrest for dangerous driving that saw his Bentley Continental GT, worth an estimated €170,000, briefly seized by law enforcement.

In the footage fans excitably react to seeing McGregor driving beside them on the N7 between Lucan and the Palmerstown area, before the camera pans to a police car flashing its lights at the former dual-weight UFC champion.

McGregor doesn’t appear to be driving particularly fast but is undertaking and this is something that will get you in trouble if spotted by the Guards.

Following his latest brush with the law, McGregor’s spokesperson Karen Kessler confirmed that McGregor had been stopped by police on his way to the gym.

“Mr. McGregor was driving to the gym when he was stopped by Gardai for alleged road traffic violations,” Kessler’s said in a statement to MMA Fighting. “He (Conor McGregor) passed the drug and alcohol test taken at the station.”

Conor McGregor Hopes To Return To Fighting This Year

‘Notorious’ last competed professionally in July of last year in the main event of UFC 264, suffering a first-round doctor’s stoppage TKO loss to Dustin Poirier after fracturing his tibia and fibula.

McGregor has just begun training again and was recently caught on camera hitting pads at the Crumlin boxing gym ahead of his eagerly anticipated comeback fight.

The 33-year-old has been angling for a title shot on his return despite the fact he has lost two consecutive fights. McGregor first made a play for Charles Oliveira’s lightweight title but has recently turned his attention to the welterweight king, Kamaru Usman. However, ‘The Nigerian Nightmare’ is expected to face Leon Edwards this summer meaning McGregor will have to wait or take an interim fight before he gets a shot at UFC gold again.

Do you think Conor McGregor did anything wrong in the above video?