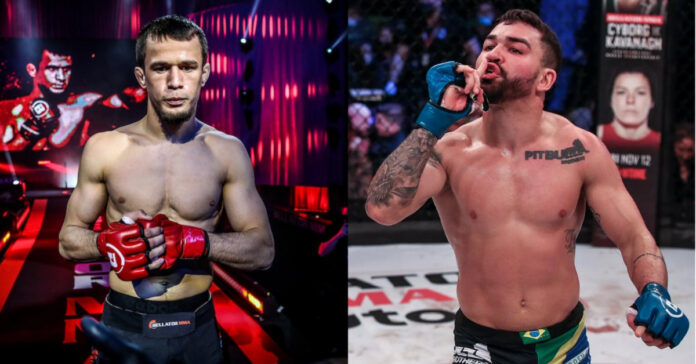 Usman Nurmagomedov is the younger cousin of all-time MMA great Khabib Nurmagomedov, who retired from the sport in 2020 with a perfect 29-0 record. Usman Nurmagomedov is set to follow in his kinsman’s footsteps, having already amassed an impressive 14-0 record, with four of these wins coming under the Bellator MMA banner. These wins have seen Usman move up the rankings, to the point where he now sits in the No.1 contender spot. However, it is worth noting that he is set to claim a victory over a currently ranked fighter.

According to a report via MMA Fight Universe, Usman Nurmagomedov is now set to take on the current Bellator MMA lightweight champion, Patricky ‘Pitbull’ Freire. The elder ‘Pitbull’ brother claimed 155lb gold in 2021, defeating Peter Queally in front of a hostile Irish crowd. He will now make his first title defense against the rising Dagestani prospect.

Many thought that it would be Tofiq Musayev who fought for the title next. The Azerbaijani recently made a successful Bellator debut, as he knocked out top contender Sindey Outlaw with a brutal right hook. Musayev also holds a victory over Patricky Freire, having picked up a decision win against the Brazilian veteran at Rizin 20.

It seems likely that Musayev will now face the winner of Patricky Freire vs. Usman Nurmagomedov.