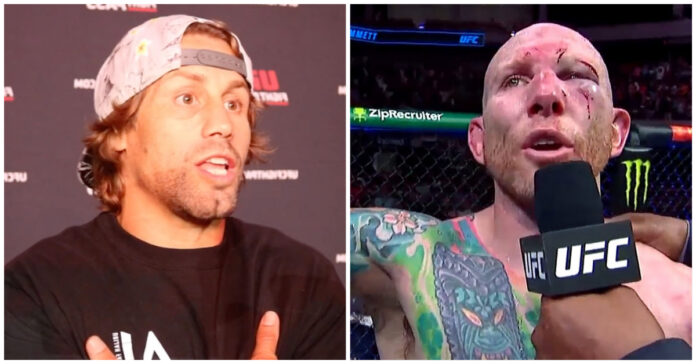 Urijah Faber was not happy with the UFC’s treatment of Josh Emmett.

This past Sunday, UFC Hall of Famer Urijah Faber was at the UFC Fight Pass Invitational 2 grappling tournament. ‘The California Kid’ previewed the upcoming matchup between Song Yadong and Cory Sandhagen.

Further, Faber claimed that Josh Emmett was not treated properly at the event.

Josh Emmett is coming off a hard-earned win over Calvin Kattar at UFC on ESPN 37. Emmett, who trains at Team Alpha Male, was present for the PPV event along with many other fighters as well as athletes currently on the roster. However, it appears that he did not receive the hospitality he was afforded.

“I was super disappointed and Josh was also, in the fact that he wasn’t treated that great this last week,” Faber said. “We were expecting him to be there, sidelines. He’s beaten so many guys in dominant fashion, he’s had some major injuries, and he needs that fight next for the 145 pound belt.

“He’s the guy that can match up well with [Alexander] Volkanovski, who can pack a punch that puts people out cold with one punch, he can handle volume, he’s wrestled his whole life, wrestled in college. That’s the match-up,” Faber told media at the Invitational. He added, “Josh is the guy. We were hoping to get the camera on him watching the event, and to be honest, it was kind of a mishap, but he had a really bad experience.” (h/t Cageside Press)

According to Urijah Faber, Emmett was treated like he was unwelcome at the occasion. He was exiled to the back rows and cut out from any air time on the broadcast.

“(Emmett) was put way back in the seating, not even with the rest of the guys and had to find his way by himself upstairs because they have peons working security that are getting paid minimum wage that are like, ‘Hey, you can’t come this way.’ He’s not a confrontational guy unless you’re paying him to beat someone up.

“He was really upset that there wasn’t more made of the fact that he’s the guy in line. I’m going to talk to Dana [White] about it and talk to Hunter [Campbell] and let them know that it’s really bullsh*t.”

Faber further shared Emmett’s reaction to the whole debacle as he felt like he was being treated undeservedly.

“Last night, he was like ‘F-this, I wish they’d just release me, I get no respect, blah blah blah. I think I’m going to drop down to 135 to fight Sean O’Malley, because that’s who’s getting all the credit,’” Faber said.

“Nothing, ghosted. It’s really sad and his wife was livid, he was livid and he was just like, ‘What do I have to do to get a little bit of respect?’’ Faber added. “So Dana, I hope you see this and understand that it’s Josh’s time.”