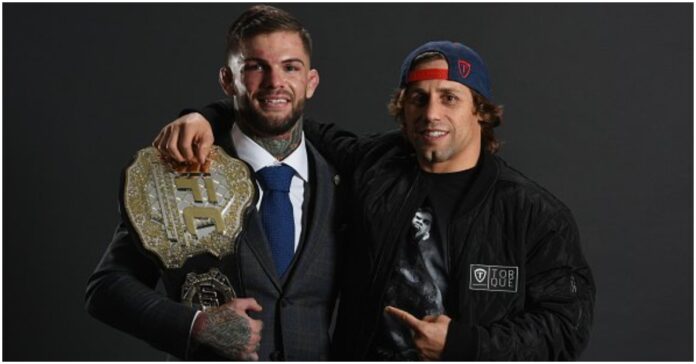 Urijah Faber has backed Cody Garbrandt to bounce back from his recent run of poor form.

‘No Love’ put on one of the best UFC title-winning performances of all-time to dethrone Dominick Cruz in 2016 but since then things haven’t gone according to plan for Garbrandt.

The 30-year-old has lost five of his last six fights including his most recent bout that saw him drop down to flyweight for a fight with Kai Kara-France, only to be stopped inside one round at UFC 269.

During a recent interview with MMA Junkie, Faber commented on Garbrandt’s recent skid and backed his teammate to get back on the right track, as all it takes is one big win.

“Without getting into the personal life of Cody, people don’t know what happens in people’s lives,” Faber said. “And some of those fights I feel like were his fights to win, sometimes maybe (he was) not as focused. I think it’s really just understanding that it needs to be an all-in attitude, and the last camp he actually had an amazing camp. He was partially at our camp and partially out in New Jersey a little bit and was super focused and on point and took everything really, really serious, and that’s all we need from him.

“He was fighting another world-class fighter, and he needs to go out and have his best performance, have some good luck on his side, and it only takes one fight for Cody to get back on the right track and build off of that momentum. But he’s had his own battles inside, outside the octagon, and that’s more his story to tell. But very young guy, the world is his oyster if he gets on the right track and makes it happen.”

It’s currently unclear what the future holds for Garbrandt who hasn’t closed the door on fighting at flyweight despite losing in his divisional debut. The former bantamweight champion has also expressed his willingness to return to 135lbs down the line.

Do you agree with Urijah Faber? Will Cody Garbrandt get back on track?