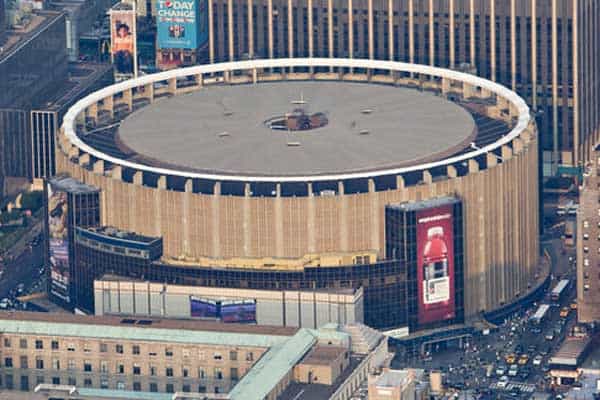 The UFC is going to war with New York over the recent decision to uphold the ban on MMA….

The continued battle between the UFC and the state of New York got kicked up a notch today, as the promotion announced an April 23rd event in the monumental Madison Square Garden venue. The State of NY, made famous for countless classic boxing matches over the years, has proved to be a thorn in the side of the biggest MMA promotion, who today announced ground breaking news on their website.

Not only will the UFC be suing New York, they’ll be attempting to obtain a federal injunction against the state for their recent decision to keep MMA out of ‘The Big Apple’:

“We believe fight fans have waited long enough to experience live UFC events in the state of New York, and we are thrilled to announce our first event at Madison Square Garden,” UFC Senior Executive Vice President and Chief Operating Officer Lawrence Epstein stated in the announcement. “Professional MMA is legal around of the world, and it is about time New York followed suit.”

In August, UFC filed an appeal in the United States Court of Appeals for the Second Circuit – the federal appellate court with jurisdiction over New York – stating that New York’s prohibition of regulated professional MMA events violates the First Amendment rights of athletes and fans throughout the state.

On September 28, UFC filed a new case in federal court, reiterating its claim that the New York law banning MMA events is unconstitutional. This out-of-date law is too unclear for the public to understand, and has allowed regulators in New York to pick and choose arbitrarily what events they will permit. Events featuring every combat sport except MMA seem to be allowed in New York, though this is not explicitly stated in the law. The statute, and the state’s pattern of enforcing it, violates the Constitution’s prohibition on unconstitutionally vague laws.

Later this week, UFC will ask a federal judge to issue a preliminary injunction against New York state officials enforcing its unconstitutional law. Without such an injunction, the event at Madison Square Garden will not be able to proceed.

New York represents one of the most targeted locations on the planet for sports, and the UFC wants their piece of the pie. This aggressive tactic could be the move that finally ends the stand off between the two entities. Either that, or it could further cement the ban if it should blow up in the UFC’s face.

In a state ruled by boxing since sports became profitable, will Zuffa and co. make history once again by taking out the NY officials that staunchly oppose MMA? It’s widely believed that, should the UFC win the battle against New York, UFC 198 will be the event on April 23 2016 in MSG.

Stay tuned for more updates as they come in.