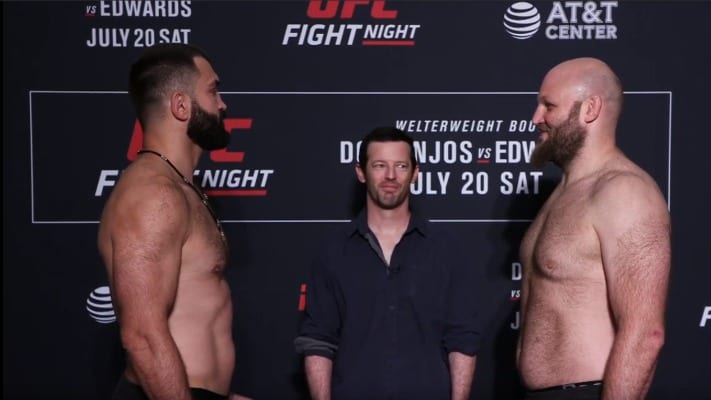 Andrei Arlovski vs. Ben Rothwell in a heavyweight bout opens the main card of the UFC San Antonio event:

Round 1: Rothwell was pressing him early and Arlovski started throwing more strikes than usual this early. Arlovski lost his balance after eating a strike but resets and returns fire. Arlovski answered with his own combo that rocked Rothwell. Rothwell had a cut under his left eye and was bleeding pretty good. Arlovski connected with back-to-back spinning back fists.

Round 2: Rothwell cracks Arlovski with a right hook right out of the gate. Arlovski just grazed him with a head kick as he continues to close in and land right hooks. Rothwell clinches with him up against the fence and did some dirty boxing. This upset the crowd with some boos.

Round 3: Arlovski was just faster firing off shots and Rothwell just ate them. Arlovski landed his jab at will before Rothwell clinched up with him against the fence. The fans booed even louder. They exchanged to end the round.