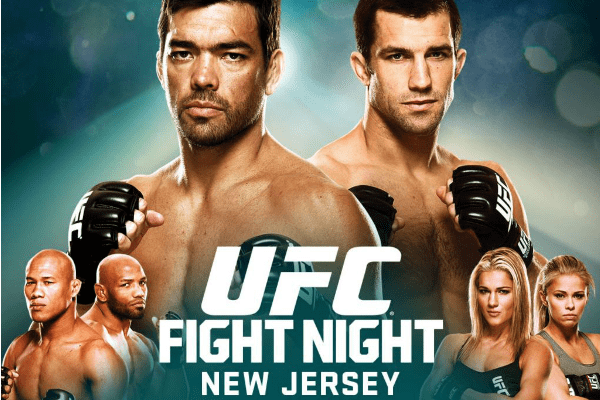 The packed main card featured a high stakes middleweight between top contenders Lyoto Machida and Luke Rockhold, with the winner supposedly getting the next title shot. But with No. 1-ranked Ronaldo “Jacare” Souza destroying late replacement Chris Camozzi in the co-main event, Machida and Rockhold had to win impressively to truly solidify a notoriously uncertain shot at gold.

The pivotal fight began with Rockhold patiently stalking “The Dragon.” He threw a low kick and Machida landed some solid shots, folowing with a big left and a right. But Rockhold rocked Machida, locking on a tight guillotine from top position. Machida escaped yet was mounted, Rockhold weighing heavy from top position. He took Machida’s back and drug him to the ground, landing a big punch when Machida spun away. He tripped “The Dragon” when he tried to get up, unloading huge punches from his back. Machida was in big trouble when Rockhold locked on a rear naked choke, but somehow Machida survived, absorbing a massive elbow as he was saved by the first round bell.

A wobbled Machida looked in trouble to start the second as Rockhold snapped a kick. Machida threw a few strikes that didn’t do much, and Rockhold pushed him to the ground to rain down more shots. Rockhold went for the choke again, and this time it was much too tight to fight through. Rockhold forced Machida to tap, becoming the third fighter to finish “The Dragon” and most likely earning the next title shot.

Camozzi came out with a strong inside leg kick, following with another. Souza came back with a hard body kick and two big punches, and Camozzi missed a huge high kick. Jacare kicked the body again, following with a strong takedown to control Camozzi from the guard. Quickly passing to side control, Jacare spun for an armbar and cinched it in, getting a verbal submission for his second first round sub of Camozzi.

In many fans’ pick for the card’s “Fight of the Night,” No. 5-ranked featherweight Cub Swanson threw down with surging No. 9 competitor Max Holloway. The fight began with Holloway landing some varied light kicks as Swanson looked to find his timing. Holloway was aggressive with his kicks and punches, but Swanson countered with a stylish plant kick. Holloway rushed forward with a leaping knee and punches, following with a counter left. Swanson snapped a kick to the body before more combos and a spoinning back kick landed from Holloway. Swanson landed two lefts and Holloway missed a kick, and they went to war as the bell souned on a great first frame for Holloway.

“Blessed” continued landing kicks to the body in the second, jumping in and out of the pocket to pepper Swanson with shots in close. Swanson snapped a hook, but Holloway stayed largely out of range and landed a combo. He kept his striking volume high with varied and effective shots from all angles. Swanson turned it up in the final minute of the second round, but Holloway met him with a big knee and head kick. “Blessed” ended the frame with a big combo that appeared to wobble Swanson. A spinning back kick and jab from Holloway began the third, and Swanson landed a big hook. Holloway switched to the body, nailing Swanson with a huge shot that dropped him. Holloway locked on a tight arm triangle on the ground and Swanson got out to return to the feet. Holloway rushed forward with some vicious straight left hands, dropping Swanson to go for a tight guillotine as Swanson struggled but was forced to tap for an impressive and dominant win for Holloway.

Starting off the main card was the grudge-fueled women’s strawweight match between The Ultimate fighter (TUF) 20 personality Felice Herrig and Reebok-endorsed prospect Paige VanZant. Herrig came out aggressive with some punches up close, prompting VanZant to clinch and go for a judo throw. Herrig reversed to get the back of “12 Gauge,” seeking both an armbar and a rear-naked choke. VanZant survived an armbar to spike Herrig on her head, getting up to land a strong knee to the body. Herrig clinched but VanZant threw her again, landing some good ground shots and ending the first attempting a heel hook.

Herrig ate a low kick to land a combination of punches in the second, rushing forward when VanZant tripped. A lengthy clinch saw “12 Gauge” score with knees, ragging Herrig to the ground and scrambling to land in top control. The bout went back to the feet and VanZant reversed a takedown and got side control and rain down punches. Herrig went for another armbar that missed, paying for it by eating some big shots as the second wore down. VanZant unleashed on a worn down Herrig in the third, landing relentless shots on the ground. Somehow the exhausted Herrig took VanZant’s back, but it didn’t last. VanZant got top position again to swarm with endless ground and pound to lock up the clear unanimous decision.

Join Lowkickmma.com for live, up-to-the-minute results for tonight’s main card as they unfold.